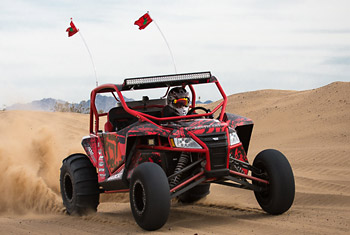 Ever stop and wonder what it feels like behind the wheel of a side-x-side capable of 290 horsepower?

Once you buckle in and drive the Z1100 Turbo you’re left wanting more thanks to the craftsmanship and engineering PACE Offroad has put into the development of its cars.

What does power to weight have to do with PACE Offroad’s Z1100 Turbo? Everything – more specifically everything done just right!

Greg Biffle and his crew at PACE Offroad have confidently done more than just shoehorn an 1100 Turbo motor into the chassis of a Wildcat or RZR. Testing has spanned years. They’ve also successfully mastered suspension, clutching and overall chassis dynamics to harness the power output of the 1100 turbo mill.

You can have lots of fun in a stock Wildcat or XP1K, but if you’re stuck behind a PACE Offroad Z1100 Turbo, you might as well get used to eating dust.

At 177 horsepower our Z1100 just kept pulling up the longest hills and through the roughest whooped out sections. The torque from this motor seemed endless and the suspension was simply bottomless!

Bump the boost to Dune/Trail mode and 245 ponies, mate with a perfectly balanced chassis and roost sand 70 feet in the air. In full-on race mode, the 290 horsepower Wildcat made a mockery of stock RZRs while drag racing up Oldsmobile Hill, then back to the bottom blitzing through the huge whoops at 60 mph before the XP1K even reached the top.

At 245 horsepower and at a price point that is very affordable these are a dream come true and until government regulations loosen and the OEMs can produce their own vehicles capable of these numbers, PACE Offroad is without a doubt the best source for diehards with the need for speed.

Vern Putzer
Vern Putzer is the Producer of Dirt Trax TV and is also a Contributing Editor and Guest Correspondent on the show.
Previous articleITP Storm Series Hurricane Wheels
Next articleRZR Sweetens Pot for 2015 King of the Hammers