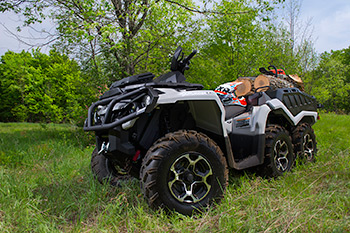 Check any preconceived notions you might have about a 6×6 ATV at the door Before reading any further. It’s natural to automatically compare the new Outlander 6×6 to a Polaris Big Boss, but beyond 6 wheels there’s no comparison.

The Outlander 6×6 marks the first time a Can-Am ATV has been developed outside North America. With a growing international demand for a utility vehicle that occupies the smallest possible footprint, BRP’s engineers in Rovaniemi, Finland led development with a goal to design a utility vehicle that could handle the highest demands of work and traverse the toughest terrain without compromising the ride and handling Can-Am’s G2 chassis is known for.

The first step in the process was lengthening the vehicle to accommodate a third axle. Building off of the Outlander 4×4 chassis engineers extended the wheelbase by 78.6 cm (31.44″) and increased the overall length by 111.6 cm (44.64″), which allowed for a rear cargo bed nearly 4-feet in length with a cargo carrying capacity of 363kg or just one pound shy of 800 lbs.

The Outlander 6×6 brings on a whole new definition to the word modular. Offered standard as a tilt function flat bed with an extra 70 liter under-storage compartment, the rear cargo area can be transformed into a variety of configurations. It can be as simple as adding side-walls and a latched gate, to outfitting the cargo area with specific configurations for farming, or forestry. Can-Am also offers a really cool enclosed cargo cover for winter use.

BRP’s engineers incorporated a double TTI rear suspension with 9.3 inches of travel, which eliminated the butterfly movement of the rear tires keeping the width of the ATV the same as its 4-wheel brother.

For increased stability, traction and balance, pivot points were lowered for better geometric squatting and a detachable external sway bar is easily removed by pulling out two pins. Ground clearance for the Outlander 6×6 measures at 12.2-inches and its turning radius is 9.0 meters, a full meter less than a Polaris Big Boss.

With a cargo carrying capacity of nearly 800lbs and a towing capacity of 1,650lbs the need for the 82hp 1,000cc Rotax motor in the Outlander 6×6 was obvious. However BRP’s engineers knew increased torque and cooling were critical to its performance.

Starting with the gearbox, low gear was improved to provide a 50% lower ratio than the Outlander 4×4 and 10% lower than the Big Boss. Since the Outlander 6×6 is meant to work hard at low speeds, new side panels were designed to force hot air back and away from the riders legs and the CVT was improved with the air intake and outlet channels borrowed from the deep mud Outlander the X mr. New ECU programming also turns on the electric fan more frequently to compensate for lack of forced air cooling you’d normally get when traveling at higher speeds.

With the transmission in low range, the Outlander 6×6 confidently crawls along terrain and up steep hills you’d otherwise think impossible. With the sway bar disconnected wheels stay in constant contact with the terrain providing maximum traction and the longer wheelbase provides such an increase in stability that you’re forced to break the habit of wanting to stand up to shift your balance to counter body roll inherent to 4-wheeled ATVs.

Additionally, Can-Am’s Viso-Lok QE differential minimizes wheel spin under slick conditions and Tri-Mode DPS makes turning and handling feather-light and adjustable to your preferred level of input at the push of a button.

While the Outlander 6×6’s utility features in low-range and over rough-terrain impressed us, its performance on trails left an ear-to-ear grin tattooed on our faces.

The Ride Development team, led by Tero Lehtoranta has calibrated suspension to near perfection. Although you might not expect it at first glance, it doesn’t take long before you’re drifting through corners and running whooped out sections of trail at high speed. The third axle is so unnoticeable while riding hard that you literally have to look behind you every once in a while to remind yourself it’s there.

Can-Am has set the bar so high we’re left wondering what the future holds for 6×6 ATVs. We don’t expect Polaris to sit idle for too long and as the market reacts to the Outlander 6×6’s introduction and we anticipate the sort of battle we’re already seeing between the Renegade and Scrambler.

One question we keep wondering though is with the Outlander 6×6 delivering everything you need in utility and rough terrain navigation with next to zero compromise on trail performance why would anyone want a 4×4?

Can-Am’s all-new Outlander 6×6 is already being introduced internationally and a release date for North America is planned for second half of 2014. You can expect a comprehensive look in an upcoming episode of DirtTrax Television and you can read more in the November issue of Dirt Trax magazine.

Vern Putzer
Vern Putzer is the Producer of Dirt Trax TV and is also a Contributing Editor and Guest Correspondent on the show.
Previous articlePACHECO WINS DIRT SERIES SXS PRO PRODUCTION 1000
Next articlePolaris Introduces Another RZR Beyond Compare