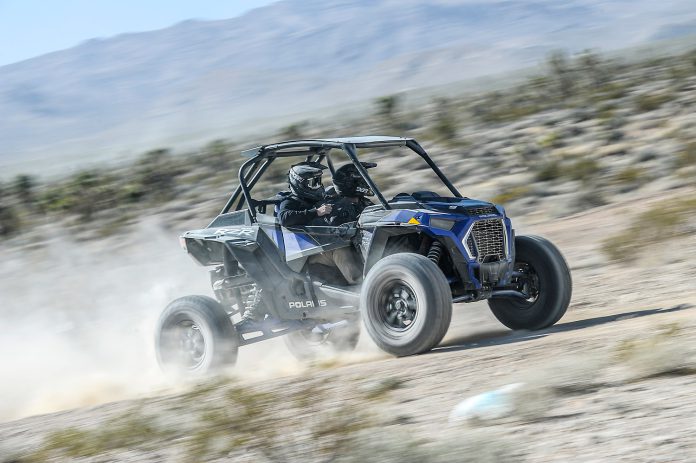 The 2018 RZR XP Turbo S is a beast of a machine and a massive leap forward in performance for the Polaris RZR line.

Its ProStar Turbo H.O. engine churns out 168-horsepower like its predecessor however fuel mapping has been tweaked to be significantly more aggressive and top speed has been increased from 80 mph to 85 mph.

Three main areas set this model apart from its competition and past RZRs are bold claims at being the industrys toughest machine, with the most evolved cockpit and the most capable suspension industry wide.

Everything about the Turbo S has been beefed up and strengthened. Standard 8-ply ITP Coyote Radial tires offer unparalleled puncture resistance with a unique tread pattern for maximum traction and control. Bearings, knuckles and shafts have all been strengthened, the front control arms are bigger and stronger and arced to work in conjunction with the tires to offer 16 inches of ground clearance, the rear trailing arms are 67% stronger than previous RZRs and the front drive is twice the size of the previous XP with 3-times higher impact strength.

Polaris also re-designed the clutch box to flow 80-pecent more air to areas that ran hotter and now cools the secondary as well as the inboard side of the belt, which results in 20 percent cooler belt temperatures that the current RZR Turbo. Polaris engineers made every effort to address any weaknesses or failures experienced during their two-year testing phase and strengthen this vehicle to tolerate maximum abuse. You might think that extra reinforcement would make the vehicle significantly heavier, but this Turbo S only sees a 200 pound increase in weight over the previous RZR XP Turbo DYNAMIX edition.