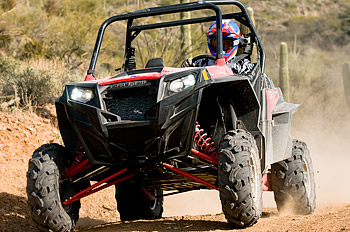 Just before Christmas, Polaris teased us with its mysterious web campaigns promising something big on 01/01/11. Like everyone else that morning, I stumbled to the coffee pot and then hit the internet to see just what was in store for us.

We now know it was an RZR S beater: The RZR XP with an insane, sand rail styled rear suspension and a new-from-the-ground-up 875cc mill tucked transversely behind the seat. We had combed all over the Internet watching video after video anxiously awaiting our first ride. This week in Arizona we got our chance and Polaris didnt disappoint.

Polaris isn’t a company that casually enters a market category with small hopes. Each team member works cohesively with one focus in mind: Dominance. The RZR XP is like nothing we’ve seen before (apart from a heavily modified rail). This 875cc EFI mill punches out a whopping 88 ponies.

Blasting through the desert trails this week, I was amazed at how much power was available at my right foot. What surprised me even more was the realization that my foot was only about two-thirds of the way to the floorboards! At full jam, driver and seat back become one as you’re pressed firmly to the backrest and your knuckles whiten as you hold onto the steering wheel with all your strength. At each pull, my grin got bigger and I imagined what it feels like to be a dog with my head hanging out the car window, ears flapping and tongue wagging.

Power delivery via the dual 46mm throttle bodies is immediate and each throttle body is mounted in the optimum position for fuel delivery to the cylinder. Simply put, there’s no throttle lag whatsoever. When you want to go, just drop the hammer and hold on tight.

The biggest talk about the RZR XP apart from the 900 moniker plastered on the hood is its 3-link trailing arm suspension with enormous travel. This setup is so sweet it just soaks up any bump you can throw at it. Through the whoops you brace yourself for that big spine cruncher but it never comes. Down the roughest sections, landing a big whoop or even through that surprise gravity cavity, the ride is plain awesome and the faster you take the chatters, the better the suspension behaves.

We can’t wait until spring for our press unit to show up at our door. Until then, you can expect a full review on Dirt Trax Television in the early season and in the spring issue of Dirt Trax Magazine.

For more on the RZR XP visit polarisindustries.com.