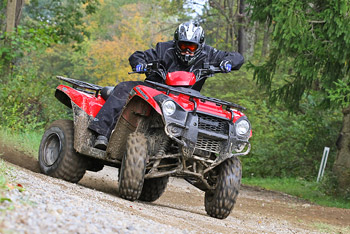 Its intro season! Seems like every week we’re getting invited to another awesome location to ride the latest and greatest offerings from the ATV and side-x-side manufactures you love. Without question, this is an awesome job.

Hot off the embargo list is Kawasaki’s latest addition to the Brute Force family, the 2012 Brute Force 300.

The BF 300 replaces Kawasaki’s 250 Bayou that has seen a decline in interest from the showroom floors over the past years as a result of its dated appearance and technology. The intro of the 300 puts Kawi back in the fight with something that offers appeal to a hot segment of the ATV market.

Lets get this straight right up front: The Brute Force 300 is NOT the Brute Force 750. This ATV is aimed directly at light-duties such as ranching, farming and is the perfect choice as a second unit to saddle your wife, tweener or even a less experienced buddy on. You can still have a blast on the trails and have confidence that when ridden appropriately this ATV won’t “get away” from him or her.

The Brute Force 300 is a stripped down version of its bigger bore brother boasting 2-wheel drive and a solid rear axle. Its 271cc carbed single cylinder engine feels a heck of a lot like a Kymco and delivered enough zip through the trails to keep our test riders interested.

Clearly, a solid rear axle doesn’t provide the smoothness at all four corners you get from IRS, however we had no complaints at all about a rough ride from this ATV.

A very comfortable seat that kept its firmness throughout our extensive testing aids this silky smooth ride and saved us from a post-ride Chiropractor visit.

The front end handling of the 300 was pleasantly surprising as well. We get spoiled rotten by EPS offered on other models from just about every manufacturer, however at no time did we feel that this ATV was difficult to steer and vibration up through the bars was minimal leaving us virtually free of arm pump.

Further to this, the out-of-the-box calibration on the front end is a benchmark that other manufacturers should reference. Turn hard into a sharp corner with a little body English thrown in and the Brute Force keeps you planted firmly in your seat with very little body roll if any.

Even in a standing position we never felt like we were getting tossed over the bars. Our riders felt controlled and confident throughout the entire day of evaluating.

You’ll find more about the 2012 Brute Force 300 in an upcoming issue of Dirt Trax Magazine and you can visit Kawasaki.com for more information on this ATV.