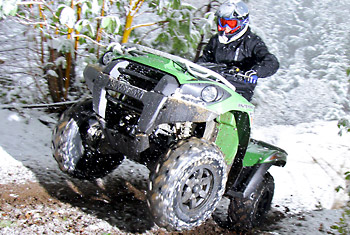 Last week Dirt Trax Magazine got the opportunity to throw a leg over the 2012 Kawasaki Brute Force 750 in the mountains surrounding Medford, Oregon.

Saying the Brute Force 750’s engine is a bit snappier as a result of this season’s modifications is like saying Pismo is a bit sandy. Kawi wants this to be its year to shine and has come to the table with a winner. The icing on the cake is the addition of electric assisted power steering.

While climbing to 4000 feet elevation, fuel delivery to the Brute’s 90-degree 749cc V-twin mill was smooth and linear. There were times we were practically vertical in our ascent and right when you needed that extra burst of power, the engine never stuttered once. The Kawasaki’s power is exceptional and low-end grunt has improved to get you up and over the crest without the slightest concern.

Power steering remains one of the best innovations since independent rear suspension. Don’t let the haters fool you. During our ride, there were plenty of rocks hidden under the snow-covered trails providing just about every opportunity for the bars to be ripped from the riders hands. Every hit was absorbed thanks to the input received by the EPS assist motor, leaving the rider feeling completely in control over extreme terrain.

One thing we truly love about Kawasaki ATVs is how we feel in the saddle. The seating position feels slightly taller than competitive brands, but it provides a better view over the front racks and makes sitting-to-standing transitions much easier.

Handlebar height is just right for a 6-foot rider size and the simple addition of sportier grips on this model provides the feeling of enhanced steering control especially when coupled with the new EPS.

You can expect a full report in the upcoming issue of Dirt Trax Magazine available in late April and you can bet we’ll be pulling all strings to get a Brute force 750 for testing on Dirt Trax Television this season.

Until then, make sure you’re signed up for Dirt Trax Magazine on Zinio.com to be among the first to get this issue (Volume 12, Number 3) without even leaving your house. Technology is awesome!