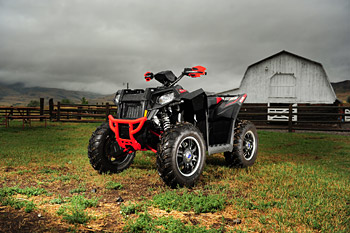 If you’re anything like the crew around the Dirt Trax offices, you were salivating at the very first site of the 2013 Polaris Scambler.

We finally got our chance to ride this ATV in the hills of Montana and came away with a few impressions of our own.

It will directly be compared to a Renegade in its stripped down sportier styling, however the two units differ greatly in their appearance.

The Scrambler’s angular design and matte black finish appear to be taken right off a stealth fighter jet. Its one of those looks that continues to grow on you until you can’t take it anymore and just have to drive down to your local dealership to run your hand along the plastic.

As you squeeze your thumb into the buttery smooth throttle and unleash all 77 ponies from the fuel injected 850 twin, your sleeves will shorten as the Scrambler blasts off down the trail.

Stab the go button as you power slide out of every corner and glance back at the wall of mud spraying behind you like it was shot from a water cannon.

The race tuned exhaust braaps out a cadence more stimulating than three Viagra and a Redbull and the ride is so supple and smooth, you’ll want Fox adjustable shocks on every ATV you ever ride from this point forward.

The super bright LED headlights are more than functional in dimly lit tree covered portions of the trail and look downright menacing as they’re approaching.

Combine this look with the sinful tones of the exhaust and you might think the gates of hell have opened and some creature from the deep is bearing down on your soul.

As much as we like the styling of the 2013 Scrambler, with all four tires spinning on a damp day, mud literally roosts everywhere – backwards, straight up and worst of all forwards so you’re literally driving into a mud storm. We think a few more inches of fender at all four corners would help keep the pilot a bit tidier throughout the ride.

Also, the footrests could do with a touch more clearout as we found all that mud tends to pool around your feet pretty quickly.

Our first spin aboard the 2013 Scrambler left us absolutely starving for more and almost unwilling to relinquish the keys.

Soon enough we’ll have a unit on the ground for testing so stay tuned to the next issue of Dirt Trax Magazine for more and watch for this intro on an upcoming episode of Dirt Trax Television!

For more info about the 2013 Polaris Scrambler, visit www.polaris.com

Mike Lester
Mike Lester is Staff Photographer and Digital Content Manager for Dirt Trax TV. He is also a Contributing Editor and Guest Correspondent on the show.
Previous articlePolaris Donates to Wounded Warrior Project
Next articleEXPERIENCE LEADS TO WISDOM