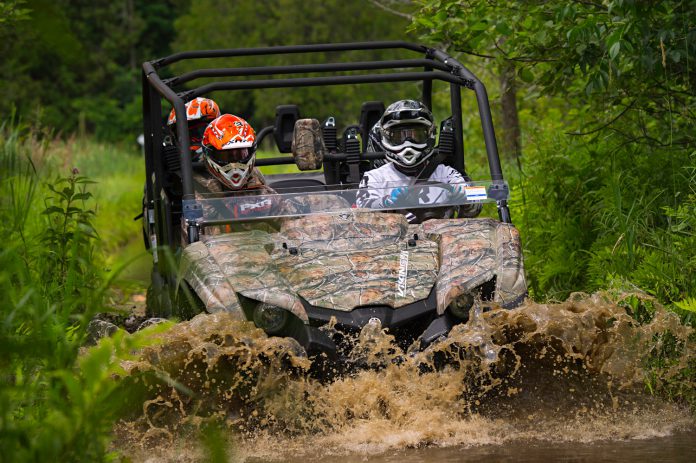 The screams and cries could be heard across the internet as fingers furiously typed in protest of the announcement of a second row of seating in Yamaha’s Viking, rounding its cab capacity out to a solid six bodies while holding firmly to the 686cc engine that graced the 3-seater version announced last season.

“Needs a 900 twin or bigger engine” says Kenneth Carroll on Facebook. “Get a bigger engine go big or go home? [SIC]” Daryl Hannon posts. The frustration was palpable. Have any of these posters driven the Viking VI yet? Probably not. So we’re here to deliver our first impressions after an afternoon aboard it and set the record straight.

First off, yeah, it’s huge and there’s no escaping that. Add another row of seats to any side-x-side and obviously it’s gonna be bigger. However, we’ve found that often times when the second row is added, space in the back seat gets a little cramped for a full-size human. Not so with the Viking VI. There’s ample room back there for three corn-fed adults and no space was sacrificed up front either.

It’s long. With a 115.6-inch wheelbase, you’re not going to be making any sudden moves with the Viking VI. However, it goes with determination wherever you point it. The power steering is precise and among the most impressive in the industry. We’d like to see tilt steering added on the next gen Viking VI as the fixed position isn’t our favorite and it just didn’t feel as comfortable as it could. That said though, steering is light and nimble and although there’s an extra row of passengers behind you, you’d easily forget they’re there.

With about 1000 pounds of meat cases buckled into the seats, ground clearance was less than we felt we needed and there were many occasions the undercarriage suffered the abuse of our rock-strewn path. However. The suspension is impressive and it soaked up the chatter from rocks and ruts leaving the driver and passengers in perfect comfort across aggressive terrain.

We get it. You want more jam. Sometimes it looks like Yamaha is lagging in the horsepower wars. Perhaps it’s a battle the company’s not even fighting, but with a vehicle of the Viking VI’s stature, there are expectations associated with its introduction.

Would the Viking VI benefit from an all-new 1000cc monster mill? Of course! There were a few times while navigating steep inclines it felt like the Viking VI lacked enough power to amply propel our 4-man crew forward. It’s these few instances where those extra ponies in the stable would’ve been just what the doctor ordered.

However, at trail speed, the Viking VI handled great and had enough power on tap to get the job done. On a closed-course straightaway we clocked the Viking VI at 85km/hour or 53 mph before the frustrating governor kicked in. Pretty impressive with four dudes on board!

So will the Viking VI win over the same guy who drives an XP1K? Nope, not even a chance and it’s not meant for him! However, for a hunter or utility enthusiast demanding quality build and bulletproof reliability that also sees value in bringing along five buddies for the adventure, the Viking VI’s the ticket and worthy of serious consideration.