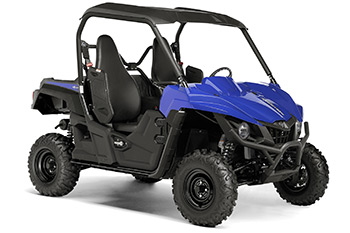 Social media has really changed the way we communicate with our viewers. Back in January we posted a press release for Yamaha’s all-new Wolverine. It was the most heavily viewed link on our Facebook page in more than a season!

Our Wolverine tackled incredibly steep and slippery inclines with ease even loaded with two well-fed adult males and about 200 pounds of gear. It’s ability to accelerate out of tight corners and get a little sideways was enough to put a smile on any SxS enthusiast’s mug.

The front-end geometry of the Wolverine R-Spec along with its adjustable KYB nitrogen charged piggyback shocks put it in a premium category. Jarring hits from rocks and stumps are adequately softened and this inspires confidence in the driver and passenger.

Yamaha’s electrically assisted power steering (EPS) may just be the best in the industry. Our initial ride left us feeling this unit might just ride and handle better than its biggest competitor. Can you smell a shootout in the works?

Yamaha directly compared the Wolverine to Kawasaki’s Teryx, which is also available in a fully loaded LE version. This base Wolverine R-Spec was packaged a little light on extras as it lacked cool-looking wheels and tilt steering. We suspect we’ll see a Limited Edition Wolverine R-spec boasting some other cool features soon enough. Make no mistake, though, there’s a ton of value here right out of the crate.

We’re amped to get our press unit on the ground at DirtTrax World Headquarters for a proper evaluation on our own turf and perhaps see how it stacks up against other SxSs in our fleet.

One thing’s for sure though, Yamaha has put together a strong offering and we suspect the 2016 Wolverine R-Spec will be a big success that will lead to even bigger things for Yamaha in the future.

Mike Lester
Mike Lester is Staff Photographer and Digital Content Manager for Dirt Trax TV. He is also a Contributing Editor and Guest Correspondent on the show.
Previous articleYamaha Donates Special Edition Viking VI
Next articleScrambler on Top of the Podium Again