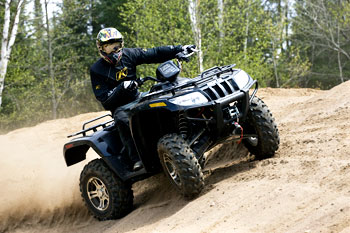 Had an extended ride on Arctic Cat’s 550 H1 EFI LE yesterday. Hey, anyone else think its time for AC to come up with its own moniker for this ATV? Prowler is cool, so is ThunderCat but ten alpha-numerics in a row gets me kinda confused.

From the outside, the 550 H1 LE is a vision of beauty. Polished plastic in a deep and shiny metallic black finish catches the sunshine in all the right places.

Its typically muscular frame is perfectly accented by a slick looking wheel package wrapped in Dunlop QuadMax tires. There’s even rough plastic along the rear fenders (typically a high-wear location) where your pants would rub so as not to scuff the gorgeous finish of this pageant finalist.

I found the engine to be a bit underpowered in comparison to the Grizzly 550 or the 550 Sportsman XP. It felt as though the throttle body was trying to wake the injectors from a nap and the engine was grudgingly working to get the cylinders firing at full capacity.

Once at speed, a tight squeeze of the brake lever would bring it to a screeching halt, though stopping distance was a bit longer than its rivals and the front end dove considerably.

I found the 550’s handling was edgy at higher trail speeds. There was too much body roll and the front end wanted to dive into corners making me feel a little uneasy in the saddle.

Where the AC inspired the most confidence was riding through deep bogs. Since it’s been a wet spring there were plenty of opportunities to test its merit. The Cat 550 offers more ground clearance than anything else in this class and it keeps the floorboards out of the drink.

It also allowed the Cat to crawl safely over hidden rocks and stumps lurking below the surface of muddy waters. Without the impact of hidden obstacles, there was less concern about rock whip up through the steering or damage to the undercarriage.

I have mixed feelings about AC’s 550 H1 EFI LE at this point in the season and will definitely need more saddle time to draw a conclusion. At this point though, even with a few issues, it’s a solid start. My suggestion: MORE POWER!