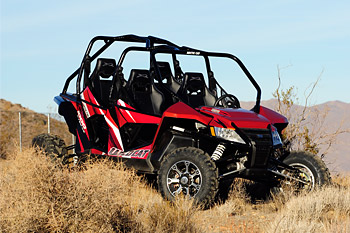 Dirt Trax got its official first ride aboard the all-new Arctic Cat Wildcat 4 this week and without question it lived up to the reputation achieved by the gen-one, 2-seater Wildcat introduced last season.

At first glance the WC4 looks simply like a stretched out Wildcat boasting the same mill and styling. That first impression might lead you to think theres really nothing new to expect, but theres so much more to this side-x-side than simply an extra row of seats.

The engineers at Arctic Cat have partnered with TEAM Industries to produce snappier, more responsive clutches for the Wildcat 4 that delivers stronger throttle response at all RPM ranges. The TEAM Industries clutch delivers better upshift and backshift over the clutch used on the previous Wildcat. Let off the gas as you enter a deeply rutted trail for just a second then stab the throttle again and theres zero lag as the clutch backsifts and its power mashes you into your backrest.

Cat has added uber beefy Fox Float shox to the WC4 at all four corners to really soak up the bumps. Enter the moguls with confidence knowing your spine isnt going to take a beating as the long travel suspension soaks up every hit.

Our riders were really impressed by how smooth the ride was in the WC4. At the initial launch of the Wildcat in November 2011 we thought for certain there was nothing that could beat what we experienced, however the combination of the 29-inch longer wheelbase with the Fox Float and 5-link suspension bridges every bump and carries the Wildcat 4 through the most rutted out sections with almost zero negative feedback inside the cockpit. Wed almost be tempted to sip a hot latte while in the passenger seat just to prove this point.

Worthy of mention is the Wildcat 4s variable assist electronic power steering, which is available on all Wildcat models. The engineers at Cat have spent many sleepless nights dialing this system in so it responds to driver input and doesnt feel too loose or erratic while driving like some other power steering units weve tested. This EPS may very well be the best system available on any side-x-side weve ever ridden. Our pilots could confidently maneuver the steering with one hand while meandering through long stretches of rock-strewn trail with no noticeable feedback up through the steering wheel.

The rear seats are the same as those found up front. Theyre comfortable and supportive and sit up slightly higher so rear passengers are able to see up over the seat in front of them to see whats coming up ahead and not just whats passing by. Theres also a passenger grab bar, tube steel frame doors like the ones up front and Arctic Cat claims 10% more leg room than competitive 4-seater models. Dont forget the cup holders and a 12-volt accessory to plug in a GPS, phone or even your iPad.

We were wowed after our first ride aboard the Wildcat 14 months ago and Arctic Cat has officially knocked our socks clean off with the WC4. Stay tuned for more about this SXS in an upcoming issue of Dirt Trax Magazine and on the next season of Dirt Trax Televsion!