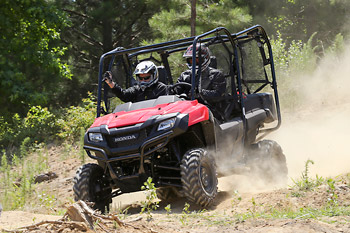 Last week Honda USA ceremoniously rolled the first Honda Pioneer 4 off the assembly line at its Honda South Carolina facility to the eager eyes of offroad and local media as well as local and state politicians.

For the offroad community this marked a big moment for Honda as remnants of its first side-x-side offering (Big Red) were swept under the rug with hopes the all-new Pioneer 2 and 4-seaters will now occupy mind space as the company’s flagship side-x-side vehicle.

Here’s the deal though, unlike the Big Red that really didn’t wow too many with its bulky almost cartoonish appearance, the Pioneer is a piece of equipment Honda can truly be proud of. Fully developed on American soil in its Ohio based Research and Development facility and assembled in Honda’s massive South Carolina plant, Honda’s North American team has built a side-x-side for enthusiasts that will, for the first time in a long time, actually get pulses pounding.

The best part is the Pioneer’s price tag, which reads a mere $9,999 (US) for the 2-seater version. Compare that to a mid-sized Ranger 500 at $9,299 and take into consideration Honda’s 675cc mill, sweet-looking and practical injection-molded doors and its slightly larger dimensions and ya, you can bet we want to perform a full-on shootout of these two vehicles as much as you want to see one.

Okay, coming back to the engine. There’s no breaking news in the engine department here. Honda has opted to continue using its tried and true 675cc single – the same one found in the Big Red and put all its focus on the vehicle it is stuffed into. It boasts Honda’s three-speed automatic transmission with an automotive torque converter. If you’re a fan of the smooth shifting operation of a CVT, you might have mixed feelings about a three-speed automatic transmission, but if you’re used to Honda’s set-up and the way this engine runs, you’ll absolutely love it in the Pioneer chassis. One thing’s for sure, this mill is absolutely bulletproof.

The Pioneer 4 really captured our interest when the press release showed up in our inboxes back in February. We couldn’t understand how Honda squeezed an extra row of seats in what looked like the exact same sized chassis as the 2-seater. The reality is actually a pretty cool idea. Its rear fold-up seats are integrated right into the bed and in as little as 4 steps can comfortably accommodate two full-sized adults.

There’s actually quite a bit of legroom in the back and you won’t find your knees mashed into the seat in front of you. It would be nice if Honda could find a bit more floorboard space in the back seats though as we did feel like we were eating our knees at a few points during our testing. If you’re sporting a double XL shirt, you might want to call shotgun.

The Pioneer’s ride quality felt pretty much dialed in during our short time aboard it. The suspension is reasonable, though we do feel it was a bit stiff at times in the small stuff yet we experienced some bottoming on big hits. These ride issues, along with some excessive body roll could be virtually eliminated with the addition of a stiffer sway bar and softer springs. These are small tweaks that Hondas engineers can toy with in coming years, but can easily be forgiven with a quick reference back to its price tag.

There’s also no power steering on the Pioneer, which at first we were like, “What the heck is that all about?” Then we once again looked at the price tag and then did a quick comparison to other side-x-sides in this price range and found they didn’t have power steering either.

Truthfully, the Pioneer handles very well. It doesn’t require pipes like The Rock to maneuver through tight and twisty trails and after several hours of moderate abuse, our test pilots weren’t left whimpering and crying huddled up in the corner.

For the first time in a really long time we can say we’re genuinely excited about a new Honda product and look forward to following its reception as it hits the market. You can bet you’ll be seeing more on the Pioneer and Pioneer 4 coming up on DirtTrax Television.