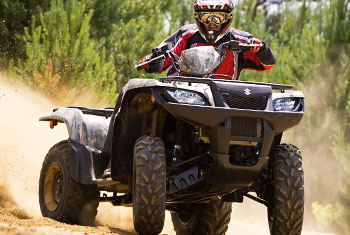 Last year I parked my cheeks on the newly designed Suzuki Z400 in southern California and spent the day testing its merits. Almost immediately I felt renewed respect for what Suzuki was packaging up and delivering to the ATV universe.

The KQ has just about the best handlebar setup of any other ATV I’ve ridden this season. It feels so similar to the Z400, if you closed your eyes so you couldn’t see the swale hole in front of you, you’d swear you were lining up at the starting gates.

The KingQuad also boasts another feature I’m fond of – dual brake levers. How are they? Excellent. At any speed, grab two fists full and you’ll stop in a hurry. Plus, 4×4 and differential lock are right at your right thumb and engage effortlessly. Throw it in low and you’ll make your way through mud that comes up over the front fenders – we did… a bunch of times!

Speaking of fenders though, I’m unhappy with the flimsy plastic Suzuki has chosen for the KQ. In comparison with just about any other big player out there, it just doesn’t have the toughness and durability I expect in a Sport Ute.

This carries on down to the front grill. Our unit had no winch, so in the few instances that we did get stuck, there was no front bush bar or anything substantial on the front end to attach a winch cable to. Hooking that cable to the A-arm nearly resulted in tearing off the entire front plastic. Not a happy trail memory.

In BIGGER BIG BORE: 2009 SUZUKI KINGQUAD AXI as featured in the November issue of All-Terrain Vehicle Magazine we highlighted Suzuki’s unique power steering system that uses an ECU to send signals back and forth to power steering module to instantly calibrate for the nuances of trail riding.

Although Suzuki’s power steering system is unique, just about every OEM is adding PS to its lineup. Take one ride and you’ll never look back. We tried several times during the day to simulate rock whip with the KQ and its nearly impossible, leaving the rider in perfect control and significantly reducing the risk of injury and fatigue.

Further check marks in the “plus” column go to the KingQuad’s stellar 493cc 4-stroke mill. High and low range grunt out lots of smooth and even power and although on open plains the KQ had a tough time keeping up with the 500 Outlander, at trail speed its abilities were more than satisfactory and on call at the squeeze of your thumb.