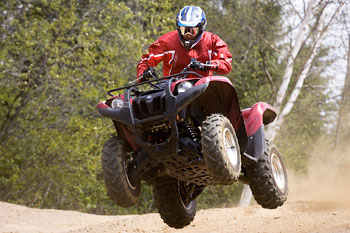 Squint your eyes and you might think you’re looking at a 700 Grizzly. Without question, the ’09 550 Grizz is a spitting image of its big brother with just a handful fewer ponies.

The custom graphics slathered all over the Special Edition we rode the other day would make any custom enthusiast salivate. Slap cast aluminum wheels on this package for a bit of sizzle and the Grizzly will melt your heart.

Oddly though, the smallish stock tires do a disservice to the overall appearance of the Grizz and lack the aggressive tread so readily available on comparable units. If I laid down my own deniro, the first thing I’d do is throw on a set of GBC Dirt Tamers to toughen it up.

A squash of the throttle thumps fuel to the 4-valve, 4-stroke packed between your knees via the Grizzly’s fuel injection system and when you get a bit too enthusiastic, a double fisted squeeze of the brakes brings things to a quick stop.

I’m a big fan of the dual brake lever and the Grizz actually had a shorter stopping distance than Arctic Cat’s 550 and about the same as the Sportsman 550 XP – likely due to its lightness in relation to those two.

At full pump and the piston churning, trail handling remains exceptional. With the slightest effort, the EPS Grizz will instinctively track to whatever path you’re choosing bestowing a sense of harmony between rider and ATV.

It also adjusts to trail interference with nearly zero feedback through the handlebars. Seriously, if you’re laying down big dollars for a sport-ute, why wouldn’t you shell out the extra bucks for power steering?!

I’ve been a fan of the Grizzly since way back. Actually talked my father-in-law into buying a 660, which he still rides and enjoys. The addition of fuel injection and most recently, power steering, puts the 550 Grizzly at the top of my list. Its beautiful, intuitive and everything I want from an ATV in this class.