Gettin’ Paid To Play In The Mud 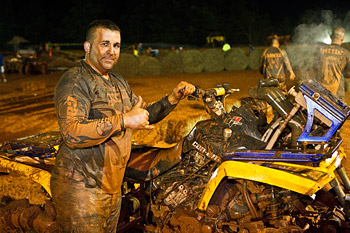 Just a few weeks back I had the opportunity to attend what is to date the highest payout ATV mud racing event.

The sport of ATV and SXS mud racing has taken off in the south from Georgia to Texas and these guys are serious about their machines.

Taking a perfectly good Can-Am Outlander and jacking it up several inches, then throwing it into four feet of mud isn’t something most would consider, but for the Championship Mud Racing regulars it’s business as usual.

On August 22nd in Enterprise Alabama the CMR held its regular series race and then things got real serious as the Bama Jam Farm had posted an all cash $35,000 pot for everyone to take a shot at.

This was not only the highest payout ever for the sport but it also had a smooth little twist. Let’s say you won every round up until the point where talent ran out and you lost. Well, in this game you paid a fee of $100 and were thrown back into the mix again. How’s that for a second chance!

Each class had its buy-backs, but when it was all said and done it was Can-Am/Gorilla Axle sponsored rider Dakotah “10-k” Klein who took home the most cash at a whopping $10,000 dollars for the open class.

This would be the single biggest award our sport had seen, but according to the promoters it wouldn’t be the last. I think I just might get in on that action next year!