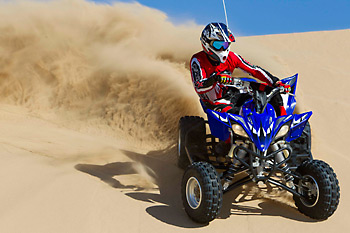 Only the luckiest ATVers have experienced Glamis. The Imperial Sand Dunes (Glamis) are a legendary 200 square mile off-roading playground located at the south-eastern tip of California near the tiny town of Brawley and 20 miles from Yuma, AZ.

The dunes are nature’s gift to motorheads and the result of windblown sand off ancient Lake Cahuilla over the course of thousands of years. On holiday weekends as many as 150,000 off-road vehicles have been known to make their way to this Sahara-like phenomenon, and for years I couldnt understand what the big deal was. That is, until I got the chance to experience it for myself.

Recently, a handful of selected ATV editors (including me) were once again spoiled by Yamaha USA and brought to the Imperial Sand Dunes to ride the wheels off the updated Raptor 700 and YFZ-450. Talk about making the most of my first ride in Glamis!

Obviously it was exciting enough just to be in this legendary riding spot where Jabba the Hut tossed Luke Skywalker into the Great Pit of Carkoon in 1982, but to be riding the very best of the best ATVs there really made the experience over-the-top.

The Raptor 700, with its plush suspension and dynamite engine, was purpose-built to perform in the dunes. I couldnt have been plopped on a better ATV for my first ride in Glamis. Riding the dunes is like riding a continuous roller coaster that youre in control of. You can literally hold the Raptor’s throttle wide open and ride from one bowl to the next until the adrenaline makes your heart miss a beat.

The YFZ-450 is the preferred choice for many experienced dune riders. Its high performance, torquey powerplant does not disappoint one bit. Those who know how the dunes flow often choose the YFZ for the pure sport, rigidity and off-the-seat ride this quad lends so naturally.

After a few hours on the Raptor I saddled up a 450 and found my groove. The low CG and more compact feel of the YFZ allows the rider to corner harder and kick up walls of sand 20 feet high. Moving from bowl to bowl you often need to maneuver up and down small crests and catching air off those on the YFZ is as good as it gets. Truthfully, you can’t go wrong with either of these two quads in the Imperial Sand Dunes and I wouldn’t have wanted to ride anything else in these conditions.

Glamis is absolutely the most fun you can have riding an ATV. Dont believe me? Do yourself a favor and maximize your visit to Glamis by bringing along a Yamaha Raptor 700 or YFZ-450. If you’re going to make the trip to the world’s greatest riding destination, you might as well ride the very best ATVs too.

Read my full report on the updated Yamaha Raptor and YFZ-450 in the next issue of Dirt Trax Magazine.

Matt Lester
Matt Lester is an Account Manager for Dirt Trax TV. He is also a Contributing Editor and Guest Correspondent on the show focusing on tourism & adventure segments.
Previous articleSTURTEVANT PLANT BECOMES HEART OF EVINRUDE
Next articleGOLD MEDAL WIN