GREG BIFFLE WILL TURBO YOUR WILDCAT 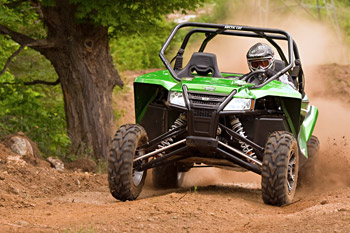 Greg Biffle, driver of the Roush-Fenway 3M Ford Fusion in the NASCAR Sprint Cup Series and one of the fastest guys on four wheels has launched his own ultra-high-performance aftermarket company building custom extreme performance side-x-sides.

To be more specific, Biffle’s company, Pace Off-Road, specializes in the complete re-invention of the popular Arctic Cat Wildcat and Wildcat X models.

After a lengthy conversation with the Biff we can say Pace is definitely setting the “pace” in hyper-powered Pure Sport side-x-sides.

Get this: Pace will accept your Wildcat at its remanufacturing facility in North Carolina along with a check or credit card. Your Wildcat’s stock V-twin will then be removed and in its place Biffle will insert a 177-hp 1056cc turbocharged and intercooled parallel twin snowmobile engine.

This engine, according to snowmobiling’s number one magazine Supertrax International, produces the strongest acceleration and top speed of any snowmobile on Earth when inserted into Arctic Cat’s ProCross snowmobile platform.

Better than this, Supertrax tells us aftermarket engine controllers can unleash as much as 260 horsepower from the same engine Biffle is using.

Stay tuned for more about Pace Off-Road and its amazing Wildcat conversions.