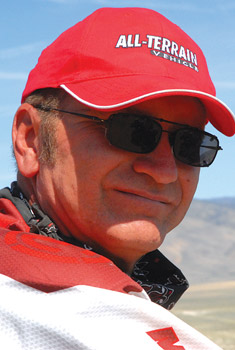 The publishing group that owns All-Terrain Vehicle Magazine took an important step this past February. Supertrax Media Inc. has acquired Dirt Trax Television, the largest viewed ATV television show in both the US and Canada.

As many of our readers in the US and Canada already know, All-Terrain Vehicle Magazine is owned by the same group publishing North America’s number one rated and largest circulation snowmobile enthusiast title, Supertrax International Magazine.

Those familiar with both Dirt Trax and SnowTrax Television will remember John Massingberd, the founder of both shows and host for 13 years of SnowTrax TV.

John was a tremendous guy and a valued friend of both my brother Kent and I. John succumbed to ALS on December 1st 2008 after battling Lou Gehrigs Disease for 15 months.

The “Big Guy’s” memory will be preserved and his contributions valued by all of us here at All-Terrain Vehicle and Supertrax International Magazines.

The opportunity for our readers to increase their ATV knowledge using both All-Terrain Vehicle Magazine and Dirt Trax TV is one of our biggest goals.

Look for appearances from All-Terrain Vehicle Magazine staff expounding opinions on new technology, new equipment, land use issues and how-to features aimed at saving viewers money on maintenance and improving the performance of their rides.

While current economic realities have tried to lower enthusiasm for our sport, sales of 4-wheelers have remained respectable in most markets. In fact, in response to the ever increasing popularity of UTV 4-wheelers, All-Terrain Vehicle Magazine will feature a special SxS Buyers Guide in our June edition.

In the past, our Field Guide issue traditionally carried both ATVs and UTVs in a buyers guide format. This year, we’re targeting UTVs in a dedicated June issue.

Don’t panic, though, our June issue will still be packed with tons of ATV info, particularly new model launches from Can-Am and a couple more OEMs.

Visit DirtTraxTV.com to watch full episodes of the show from this past season!