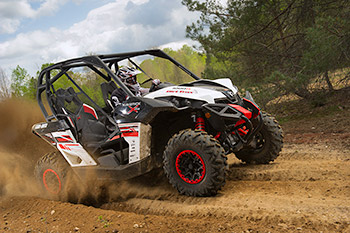 There’s been some significant battling taking place in the industry as OEMs try to outrank one another with the most horsepower.

It’s nothing new, really. This one-upmanship has been going on for years in almost every segment of powersports.

In the ATV and SxS biz however, it begs examination. Does it really matter if an engine of one company’s brand has four or five more horsepower than a competitor? The obvious answer is yes, but there are a couple of caveats.

First, if the engine requires unreasonably high RPM to develop its peak horsepower numbers, it can become virtually unrideable in heavy load situations like hauling cargo, towing, slogging through thick mud in 4WD or extreme climbing. Hey, doesn’t this sound like familiar territory for off-road riders?

Yes, the same high-revving engine will go faster than a comparable ATV or SxS when it’s wound out – maybe on a flat, wide-open surface – but will it perform as capably in about 95-percent of real riding conditions?

Secondly, it’s hard difficult to get real torque numbers from the manufacturers. Everyone loves to crow about HP but just try to find out what the peak torque output is on most popular off-road vehicles.

Unless we individually dyno-test every vehicle, it leaves us in a position of trying to compare apples to oranges.

Frankly, we suspect the dynamometer torque readings for some big-inch singles meets or surpasses the output of many bigger displacement and higher horsepower twins and V-twins.

Yes, in a drag race the twins are faster but when it comes to real world use, the big single will out-pull, out-haul and out-climb them. It’s one reason 500 to 700cc singles are so popular and so nicely fill the bill of requirements of masses of owners.

Our only suggestion as a remedy for this lack of good info is for you to “try before you buy”. After a good test ride you may be very surprised at how much better the “other ” vehicle with less advertised horsepower performs.