IS THE RHINO DANGEROUS? 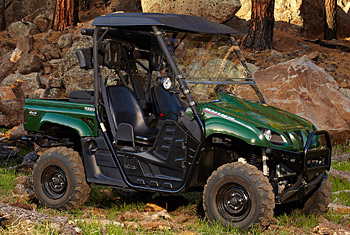 It’s like asking, “is a sedan dangerous?” The truth is, the Rhino is no more unsafe or unstable than anything else on four wheels.

If you’re driving a sedan like an idiot, impaired or showing off, there’s going to be some sort of chaos.

By late last August 2010, Yamaha had won five formal court decisions brought against the Rhino. We’ve checked out the records on some of these cases and, believe us, those making the claims were stretching logic, to say the least.

The truth is: if you look at the underpinnings and basic design of the Rhino, there’s nothing revolutionary or much different about it than about 90-percent of all the UTVs built the last fifteen years.

To accuse the Rhino of having some sort of design flaw is like saying every UTV ever built has something wrong with it that causes it to malfunction (especially when I’m drunk or acting stupid).

Here’s the problem with these kinds of lawsuits: Yamaha has virtually put its SxS development program on hold indefinitely until these suits or claims are settled.

This could take years and pretty much ensures there will be no new product development in the UTV biz from Yamaha. All the money is going into settling and fighting mostly groundless legal battles.

The “get-rich-quick-by-winning-a-lawsuit” attitude has serious repercussions for our sport. Yamaha has been paying the price for the rest of the market here, feverishly defending itself, just as Honda did back in the early 80s when the media and legal system went to war with our sport.