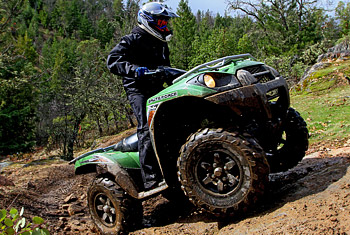 After getting the chance to ride the 2012 Brute Force 750 4x4i EPS, its obvious Kawasaki is refocused and hungry to defend its share of the market.

This leads us to speculate what we can expect from the green giant in the not-so-distant future.

In our minds, there’s no question the tweaks made to the new Brute’s V-Twin make for the snappiest throttle response in this variant’s lifecycle. Combined with EPS, this 750 is a real contender as a Big Bore Class leader with greatly improved handling and loads of power on tap.

We have to wonder if we’ll see the same mods appear in the Teryx’s powerplant and maybe, power steering. Kawasaki’s Mule already features electric power assisted steering and we think this would make sense for the Teryx line as well. More power and quicker ratio, assisted steering would be real improvements.

We also question whether Kawasaki will eventually follow Yamaha’s offering of a 550 rendition of its popular Grizzly that utilizes the same bodywork as its Big Bore brother. This would make sense to fill the gap between Kawi’s 360 and 650 engine variants and would definitely make it a strong competitor in this popular class.

We think back to the technical presentation at the recent Brute Force introduction when Kawasaki cognoscenti drew direct comparisons to the Polaris 550 Sportsman, noting that particular Polaris tipped the scales at nearly 50 pounds heavier than the 750 Brute.

We have to wonder just how much lighter Kawi’s engineers could make a 550 Brute Force.

Mike Lester
Mike Lester is Staff Photographer and Digital Content Manager for Dirt Trax TV. He is also a Contributing Editor and Guest Correspondent on the show.
Previous articleWhat’s Better, A Grizzly or A Sportsman?
Next articleCHRIS BORICH GRABS WIN AT BIG BUCK GNCC