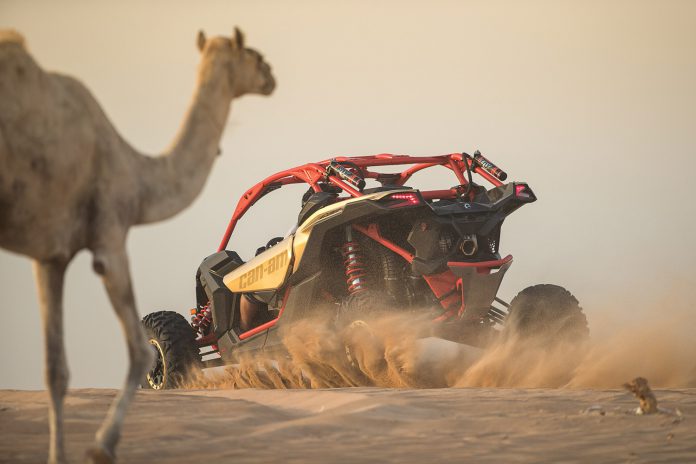 The United Arab of Emirates, more commonly referred to as the UAE, has mainly been popularized by its largest city – Dubai. This is where excess and exotic merge together forming a lifestyle that even the most eccentric consider wildly bizarre.

Ironically, this is also where old world traditions coalesce with a progressive sub culture and where someones status is measured equally by their financial clout as much as their family heritage.

While excess comes in many forms, the locals – commonly referred to as Emiratis – seemly can never quench their thirst for power. This is no more apparent than with their love for motorsports.

Whether its someone owning a 1,200 hp Bugatti Veyron Super Sport as a weekday commuter or a family owning a Nissan Patrol SUV retrofitted with a 700 hp supercharged Corvette LS3 engine to play in the dunes on the weekend; the “common folk” are die-hard horsepower enthusiasts.

The popularity of sport Side x Sides in the Middle East can best be described as feverish and the market size is quickly rivaling the American South West attracting manufactures and aftermarket companies to the area.

During the pre-launch of the Can-Am Maverick X3 in the summer of 2016, the local distributor, MTM Powersports, was given one of the early release demo units to test. They knew that if the X3 was all that it was being touted as, they would need to showcase its performance to its customer.

To do this they traveled to the desert oasis region of Liwa, which sits close to the border of Saudi Arabia. Liwa is also the home of the tallest sand dune in the UAE – the Moreeb Sand Dune that measures over 300 meters in height and has a 51-degree slope.

To their amazement the X3 Xrs with its 154hp turbo powerplant and QRS-X CVT transmission pulled hard, fast and straight up the 300-meter high dune with little to no hesitation.

MTM Powersports wanted to push further to test the limits of the X3. They continued to run it back-to-back , over-and-over again with no wavering in performance or mechanical failures. Being the first Sport Side x Side in stock form to accomplish this was a huge testament for Can-Am.

After posting the videos on social media, news traveled fast throughout the Middle East and interest in the Maverick X3 exploded.

Demand for the X3 intensified so much that Can-Am was now faced with hard decision. Where would the first production run units go – would it to be the American South West or to the UAE?

With Can-Ams market share in the UAE sitting around 30% and demand for the new Maverick escalating, Can-Am knew it had to meet demand and gain consumer loyalty. Locals were crazed for the X3 and even the high cost of air freighting the units aboard an Air Emirates A380 flight didnt faze them.

Vern Putzer
Vern Putzer is the Producer of Dirt Trax TV and is also a Contributing Editor and Guest Correspondent on the show.
Previous articleCAN-AM MAVERICK X3 X ds
Next articleWORLDS COLLIDING