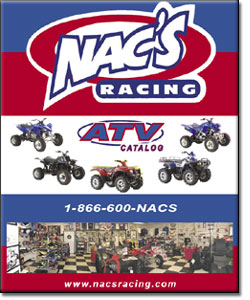 Longtime employee and Manager Doug Bruck and his wife Jeanette purchased NAC’s from Jim and Shirley Naccarato in November 2005.

Doug went to work for NAC’s in 1989 as a mechanic and then later later took over as Manager when Darren passed away from Cancer in 1998. “We wanted to keep the NAC’s name going and we’re really looking forward to the future of NAC’s.” said the Brucks. “We have a ton of ideas and hopefully we can implement all of them. We have a huge sponsorship program that we want to make even better next year and we are just starting to offer a military discount. We are also just finishing our new catalog and hope to have it out by early Spetember.”

Doug has also been busy working on a project bike which is a 2006 Honda 450R that he wants to make race-ready.