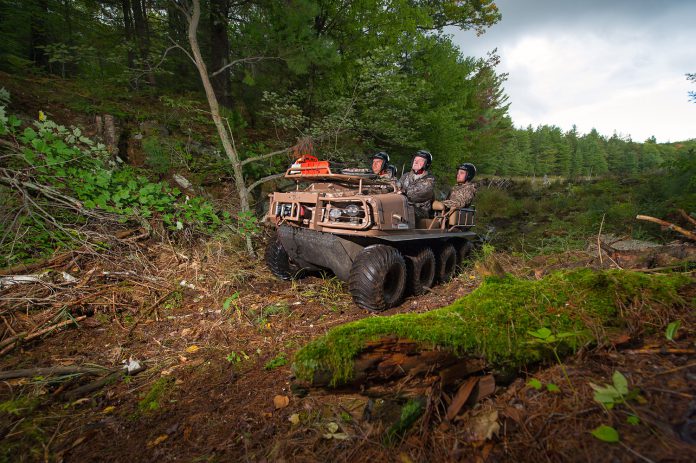 The Argo has always come across a touch quirky, offering amazing amphibious mobility while delivering less than plush or high speed solid-terrain navigation. Until recently, Argo didn’t make excuses. In the past, if you wanted amphib operation, buyers willingly put up with a bumpy, relatively slow ride.

The amazing growth of the SxS marketplace has literally yanked Argo into the mainstream. The insightful team at Argo, led by snowmobile visionary and former Arctic Cat snowmobile boss, Brad Darling, has implemented changes intended to take Argo in a new direction. We think these changes are only the beginning of a re-invention of the Argo Amphibious XTV.

Recently, the braintrust at Argo asked itself (and customers) some tough questions and learned what the barriers are to selling more Argos in this SxS obsessed market. After assimilating the data, three items surfaced needing to be dealt with to bring the Argo closer to being a mainstream competitor. They are: Improved top speed, improved ride quality and handling, and improved entry and exit from the cockpit.

While the Argo is incredibly competent on extreme terrain, it is painfully slow when covering firm, smoother terrain and trails. The answer to this issue was pretty simple. Argo is owned by Ontario Drive and Gear (ODG), a sophisticated Canadian auto industry OEM drive component manufacturer.

ODG also builds the Argo’s transmission and drive system. ODG came up with an all-new gearbox knighted the “Admiral”. The Admiral comes in different versions catering to different use profiles for the Argo. The HS version (High Speed) allows Argos to run at speeds north of 30-mph (50-kmh). This is a big improvement in transport speed over former Argos.

The Admiral also brings a new and more mainstream level of steering control. The result is “Easy Steer”. An Admiral equipped Argo now responds to turning inputs in a completely predictable way. Steering response is no longer “notchy” but rather linear and proportional, inspiring confidence when running at the higher speeds the Admiral HS allows.

Ride quality was the next area needing improvement. The six or eight chevron-style, low pressure tires are the only protection you get from impacts. It’s interesting to note, if the patented Argo chevron tires are run with very little air, there is a marked improvement in ride quality and resultant rider comfort.

The bug-a-boo comes from the potential to spin the tires on the rims when running low inflation pressures. Argo has responded with optional cast aluminum beadlock rims that securely hold the tires in place on the sporty rims, even at exceptionally low inflation pressures. If this sounds like a too-simple fix, you would be correct. However, the proof is in the pudding and 2016 Argos equipped with bead locks deliver a vastly improved ride.

The former “basketball” ride produced by inflated Argo chevron meats is toned down by a large margin. While the ride could not be called plush and there are situations where the lower inflation pressure does not make a big difference, still, there’s an overall improvement in ride quality and vehicle control. Add in the recent move to thicker and softer seat cushions and Argo ride goes from calling the chiropractic hotline to tolerable.

The third issue holding Argo back from the mainstream is pretty obvious to anyone not familiar with the Argo entry-exit ritual. In a showroom environment, an Argo looks really cool. However, figuring out a way to get your wife and small children into it is not readily apparent.

Now, most Argo models now come with a standard entry-exit step on the driver’s side. An additional step on the passenger side is optional. The step is neatly positioned between the tires to line up with the driver’s compartment and makes getting in and out of the Argo far more convenient.

Correctly responding to customer expectations is basically marketing 1:01. In the past, Argo may have been a bit reluctant to deliver the performance, comfort and convenience improvements we’ve covered here. The Argo’s popularity tells us it is increasingly on SxS shoppers’ short list of vehicles to consider.

We haven’t said much about the Argo’s amphibious capability because no other SxS vehicle can compete with it there. What if, in the future, mainstream SxSs need to be amphibious to compete with Argo? It’s not rocket science. However, for Argo to legitimately compete in the mainstream SxS marketplace it must be able to perform in critical areas of comparison. That is precisely the direction Argo is moving in.