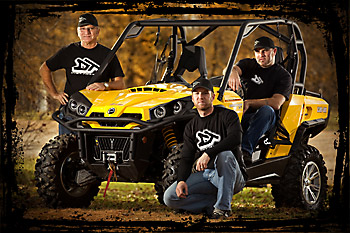 We’ve been getting a steady stream of emails and phone calls from excited viewers asking when Dirt Trax Television will return to the airwaves for the 2011 season. Our YouTube page is getting loads of daily comments and the Dirt Trax Facebook page is up close to 5,000 fans and growing!

You no doubt have heard that Dirt Trax Television can now add “award Winning” to its moniker after picking up two GMAs in Vegas this past January from Outdoor Channel for Best Videography and Best Off-Road Series. You might be wondering how we’re going to top the 2010 season, but for us the passion runs deep.

We have hands-down the best production team in the business and of course, Luke, AJ and Motorhead Mark will return this season and since the snow has melted have been going absolutely bananas in anticipation to get in front of the camera and share their thoughts on the new metal.

You’ll also notice some big changes to the TRAIL TECH shop this season. We’ve done some serious mods to our available space in the shop literally doubling the amount of floor space available to us! This will offer better opportunities for camera angles and for getting around the units being worked on so you can get a better look at what AJ’s doing. Our whole crew is amped about this and creativity is at an all-time high!

Dirt Trax returns to Outdoor Channel across the USA and to OLN and Wild TV in Canada beginning in late June. Until then, we encourage you to join us on Facebook so you can stay up-to-date on everything we’re doing and check us out on YouTube to watch great clips and make your deep and profound comments known to the entire online community.

You should also visit dirttraxtv.com regularly to check out episodes from the 2010 season to see just why we picked up awards from Outdoor Channel!

We’re pumped around here about what’s on tap for this season and can’t wait until you see what we have in store for you.

Mike Lester
Mike Lester is Staff Photographer and Digital Content Manager for Dirt Trax TV. He is also a Contributing Editor and Guest Correspondent on the show.
Previous articleCamp Well with Camp Chef
Next articleMORE POWER FROM KYMCO