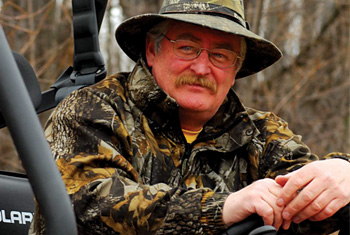 My friend, Jim Brogan and I have been fishing together since we were in our teens. We’ve covered more backcountry lakes than I could ever name and we’ve caught a lot of fish. We’ve shared a lot of memories, too, with all the hours spent on the water and one of our favorites has always been our casting competition.

Whether we were aiming at a rock sticking out of the water or a spruce shading a piece of shoreline, we’d spend hours earning bragging rights for pinpoint accuracy. In this case though, I always seemed to come up just a bit short. It was just a game to us, but it made us better fisherman.

Sometime in those early years Jim took up fly-fishing and has become tremendously skilled. He takes bass fishing on the fly to a whole new level. Sometimes I find myself inspired enough to take a lash at it, but my passion is still tossing the top water and weedless baits.

Opening weekend of bass season was something Dad and I always looked forward to. For us, it was a camp weekend with no work – nothing on the menu except fishing and relaxing.

Unfortunately we weren’t able to do this last year as my dad succumbed to cancer during the first week of July, 2009. In early August Brogan called me one morning and advised me I needed an ‘opening day at the camp’ and he was picking me up after lunch. My job was to grab my fly rod, round up some venison steaks and a bottle of rum.

Jim was clear that this outing was in Dad’s memory and he wasn’t taking no for an answer. The plan called for an evening fish, venison steaks on the ‘barbie’ and an evening by the fire pit with a few rums in the mix.

Jim’s plan also included a 5 am wake-up call, followed by an early morning fish that would have me back in the office by 8 am or 8:30 at the latest. I agreed and grabbed my fly rod and also my spinning tackle, just to be safe.

We reached the lake around three in the afternoon. Jim was determined the fly rod was the way to go that day, however I had my own thoughts on the subject and to prove him wrong I pulled out my best lures. I tried every trick in the book, but nothing was working for me.

Jim, on the other hand, was putting on a fishing clinic landing three pound small mouths with regularity. Grudgingly, I decided it was time to pull out my fly rod. Honest to goodness, next to Jim I looked like a bear cub with two left feet and, boy oh, boy, did he enjoy this. I couldn’t get a quarter of the distance that he was casting, but I was able to keep the fly either in the air or in the water.

It wasn’t pretty, but under Jim’s watchful eye and non-stop snickering, I managed to land a couple of bass that day. Yup, the fly rod prevailed and the score card was now 10 to 2 in Jim’s favor.

That night after our steaks, we shared a few too many toasts to Dad around the fire. Jim and I talked a great deal about our fathers and all the good times we spent with them. I have no idea when we decided to shut it down, but the 5 am fish was out of the question and as for being in the office for 8:30… not even close! I don’t think the hotcakes were even on the griddle by then.

Following a breakfast and some Extra Strength Tylenol, we decided to follow through with the morning fish we’d originally planned. We both started out with the fly rods and the action was slow. Suddenly I saw a rise way back in the weeds. I quickly switched to my spinning tackle rigged with a weedless, salted worm and, BAM! I was back in the game.

Jim was limited to fishing the fringe of the weeds while I was fishing in two feet of water. Every cast I threw was a strike and I quickly narrowed the gap in our competition. Well sir, I was flapping my gums like a Formula 1 race car with the throttle stuck wide open. Jim just smiled.

When all was said and done, Jim was still ahead by a couple of fish, but this trip wasn’t about numbers. It was about a friend realizing that another friend needed some cheering up. That right there is what makes a good friend so very, very special.