OUTDOORSMAN: The Games Have Begun 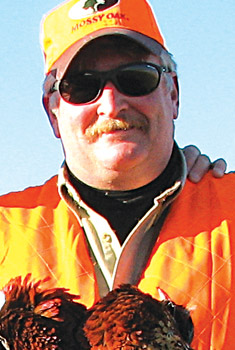 I wrapped up my winter with a stellar snowmobile ride in Northwestern Quebec in the final days of March. It was pretty obvious another snowmobiling year was coming to an end because in our last hour of riding we probably met thirty ATVs on connectors leading to the snowmobile trails. While we were loading our sleds in the trailer in front of the Forestel Hotel in Val’d Or, at least another forty 4-wheelers went by us.

One thing about the folks in Quebec: They love their quads and ride them every chance they get. It doesn’t hurt that they have a world class ATV trail system to keep everyone motivated. Back at home, by the end of the second week of March we had finished snowmobiling, so it was definitely time to get out the ATVs.

On April 9th my nephew, Brandon, and I decided it was time to make a run into the camp. I should have known better as the camp is at a higher elevation and usually has substantially more ground snow. Our justification for a run into the camp was, we felt a couple of the culverts might be plugged and should be cleaned out to prevent the camp road from being washed out. Although it was kind of a lame excuse, we never really need much of a reason for an overnighter in the camp. We knew there would be some snow in spots but didn’t see it as a problem (wrong – way wrong!).

Within the first hundred yards of turning off the main trail onto our camp road I was wishing for an Argo or an ATV on tracks. We were in for a challenge as there were still copious amounts of snow with nasty washouts thrown in for good measure. About one third of the way into the camp we actually found a plugged culvert! Thirty minutes later and only one wet foot (not me) and we were on our way. This is where it started getting really interesting as it proved to be a real grind climbing the snow covered hills. No worries. Just back up and take more runs till you make it to the top.

We were about half way in when we came to a long stretch of snow. I told Brandon, “Since I have the lighter ATV (as if it would make a difference), I’ll take a run at it first”. After three attempts, I’m in real good and hung up with all four wheels spinning, throwing nothing but snow, no ground in sight. Did I mention neither ATV had a winch? Wonderful!

After we managed to get the ‘lighter’ ATV out, we thought, “lets go to plan B”. We could see the creek was open and we had a canoe just back a ways on the trail we had come in on. We could just load our gear in the canoe and paddle to the camp. No luck; the creek was open but the pond was still frozen.

At this point we didn’t have many options left. We couldn’t go home. We could pack up our gear and walk the remaining distance into the camp. Naaah! Or… we could leave our gear on the ATVs and walk beside them hoping they would stay on top of the snow. Surprise – they did! The last half-mile was a breeze.

We fired up all three stoves – the wood stove, oil stove and the propane stove to get the chill out of the camp. It was mid-afternoon and we still had time to cut up a big hardwood that had blown down over the road.

I don’t know why, but I find venison always tastes better at the camp. Maybe it’s the fried onions, mushrooms and potatoes (very low cholesterol meal) that goes with the heady aroma of venison steaks and onions simmering away in the cast iron frying pan on the wood cook stove. Cooking time: (2 shots of Appleton Estates rum with Pepsi and a twist of lime.

Since there were only two of us in the camp, Brandon had his choice of beds. Normally, he would slide into Jim Brogan’s vacant bunk but on this night he kinda chuckled and told me there were some awful strange lumps there.

I know I’ll get blamed for this but I have absolutely no idea who filled his sleeping bag, blankets and pillow with duck decoy anchors, nuts, bolts and numerous other camp artifacts. Hey, maybe it was the same person who filled my pillow with lead decoy anchors one night!

The good news for Brandon and I was it dropped below freezing overnight and the trail set-up rock hard, making for a much less strenuous ride back to the truck.

Later that week, myself and one my neighbors, Mark, who had just lost a lifetime friend and ATV riding partner to cancer, went for another ride. This time, most of the snow was gone and the trails where frozen hard. There was no mud and we wished Bill could have been with us. He would have enjoyed it as much as we did.

Dirt Trax Onlinehttps://www.atvmag.com
Check back frequently for new content and follow us on social media!
Previous articleKawasaki/FUNCO UTV Ready for Domination
Next articleSide X side Roundup Presented by Yamaha