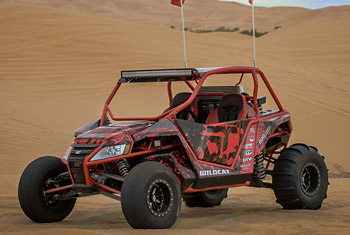 If you’ve been following our Z1100 Turbo Wildcat build on Dirt Trax Television you’ve no doubt become familiar with PACE Offroad and its founder Greg Biffle.

The products being designed at PACE offroad are composed of equal parts ingenuity, precision, performance and quality. To say we’ve been impressed with this company would be an understatement.

Building high performance sport side-x-sides is more than a passion for Greg and his team. The fruits of their labor have now established a benchmark in craftsmanship that even most OEM’s would have a hard time holding a candle to.

PACE Offroad offers performance builds for the Polaris RZR XP1K and the Arctic Cat Wildcat. While differences between these builds are primarily in the chassis, the heart of the upgrade comes from the 177 horsepower Z1100 turbo Suzuki mill commonly found in Arctic Cat’s 9000 series snowmobiles.

While the Z1100 turbo and its massive intercooler are impressive, it is the additional work to clutching, suspension and electrical that takes this vehicle’s performance to new heights.

All Z1100 engine swaps are ground up builds and the in-house hand built wiring harness is one of the most critical pieces. Built with mill spec wire and factory plug and play connectors the PACE built harness is fully heat shrunk to ensure a long life and proper electrical power to the right places including full upfitter switches and a 3-step boost control.

With safety and engine reliability being the driving force behind the custom made wiring harness and programmed ECU, the engine will not make boost until it reaches at least 120 degrees.

In Dune/Trail mode the 15lbs of boost generates between 225-230 ponies. Step up the boost in Race Mode and fill it up with 108 octane fuel and you’ll see about 28 pounds of boost nearing the 290-horsepower mark!

With so much horsepower at your fingertips you’d think the chance of overheating or burning down the motor would be likely. However, care has gone into ensuring you can run a 280hp car through the dunes without having to worry about breaking it.

Programmed into the ECU is an automatic motor shut down control that occurs between 235-240 degrees engine temp. Before a full shut down the ECU constantly monitors for detonation and will pull boost and automatically adjusts timing ensuring the motor can essentially last forever.

Check back next week for our performance and handling impressions of the PACE Offroad Z1100 Turbo in Glamis!

Vern Putzer
Vern Putzer is the Producer of Dirt Trax TV and is also a Contributing Editor and Guest Correspondent on the show.
Previous article2015 Polaris Off Road Introduction
Next articleSUPERATV PLOW PRO