PLAYING BY THE RULES 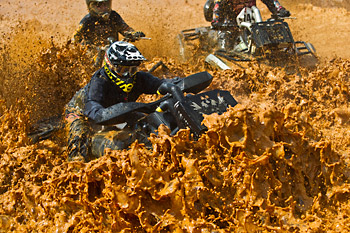 When it comes to competition, is getting the prize through deceit really worth risking your integrity?

I had a chance to attend Brimstone’s White Knuckle event in Huntsville Tennessee recently. There were hundreds of people having a great time riding and competing in the many events.

The drag racing brought out bone stock ATVs and side-x-sides and there were classes for each and every type of machine with wheels.

It was up to the discretion of the owners of these machines to enter themselves in an appropriate class for his or her vehicle. It was also expected that they’d enter legitimate classes where the competition was at least even.

Everybody has a trick or two to gain an edge when it comes to racing. Most of the time it’s gained from experience, but a single driver stood out from the rest in one event.

This guy thought it would be appropriate to run against stock displacement engines with his modified ride boasting nitrous and serious big bore internals.

He was overheard saying he’d not seen any rules or limitations for him to race his machine. He had a point on the clarity of the rules, but was he morally correct?

“Oh it’s just a 912 kit.” He said, as the purge from his sneaky nitrous blows off under the front skid plate. Sorry pal, but I’m no dummy!

Everybody knew what this guy was up to. So next time you race ask yourself, is that ten dollar trophy really worth more than your integrity?