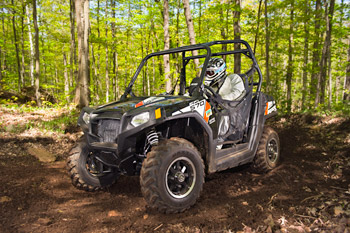 We’re on record on DirtTrax TV this past season claiming the RZR 570 might just be the first crossover Side-x-Side.

We called the 570 a crossover because that’s what it’s doing: Crossing buyers over from 2-up ATVs into side-x-sides. However, there’s more to this discussion than just 2-up capability.

The whole story would implode if the RZR 570 couldn’t go where ATVs go. Its strict adherence to a 50-inch width keeps the 570 oh-so-close to ATV width and more importantly, allows the 570 to fit almost all 2-track ATV trails.

In the RZR chassis the RZR’s SOHC 4-valve mid-40-hp ProStar mill is mounted in the same fore-aft plane as the RZR 900 XP and uses the same, updated and cool-running CVT tied directly to the engine’s cases – not isolated as it is on the 800 twin.

The tied drive system keeps the CVT drive belt in rock solid alignment all the time and thus improves belt life. The orientation of the potent 570 and its one-of-a-kind rear A-arm suspension has to be the future for the RZR line-up, especially considering there’s so many completely different rear suspensions in the RZR line using two unique engine orientations.

One word best describes the 570’s response to throttle inputs: Torquey. The smooth and clean-running 570 bites Kevlar with enthusiasm when you step on it and shifts hard all the way to it’s 60-plus mph top speed.

For a single cylinder mill displacing 570 cubes, this one impresses. Its low-end grunt is a huge contributor to the 570’s trail prowess. Whether you’re navigating tricky, steep terrain or slogging deep chocolate, the 570 responds with a solid surge off engagement and allows the driver to modulate power with ease when traction is difficult.

From a pure suspension standpoint we think the RZR’s front end is right for the 570’s narrow stance. Its double A-arm setup is plush and mostly bottomless even when jumping.

Sway control is handled from the rear with an effective anti-sway bar keeping the front wheels level and the rear inside wheel from lifting under hard braking while turning.

At the rear the double A-arm system uses what appears to be stubby arms and we suspect they’re part of the reason for a sometimes choppy response on small bumps.

The rear suspension shocks offer preload adjustability. If you soften the springs you will notice less jiggling, however you will ka-bong the bottom of the 570 off rocks with greater frequency.

We installed a set of premium, adjustable Fox Shocks similar to the ones found on the Wildcat Trail, which immediately improved small bump ride compliance.

The RZR 570 might just be the right 2-upper for you and your family. There’s virtually no ground the 570 LE with EPS and EBS cannot traverse.

Try an RZR 570 on your favorite ATV trails and see for yourself if what we’re saying is nuts.