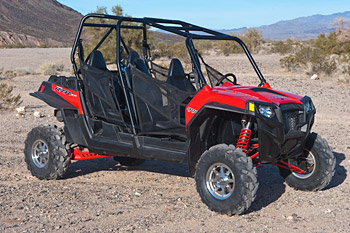 Polaris has undeniably been the most progressive UTV OEM over the past decade and with the recent introduction of their 2012 UTV line-up, they are showing no signs of complacency.

For 2012 Polaris has given us plenty to be excited about, starting with a value oriented RZR 570 for those who don’t require the mind blowing speed but want to go everywhere the bigger bore machines go.

We’ve already seen the RZR XP 900 but the latest news for the Polaris UTV line-up though is the introduction of the RZR XP 4 900.

We were on hand for the introduction so here’s an online sneak peek before we give you the full assessment in an upcoming issue of Dirt Trax Magazine.

The all-new Polaris RZR XP 4 900 is the only extreme performance UTV that safely seats up to four riders.

A full day’s ride through the Arizona desert showed us there is no shortage of power and the suspension is nothing short of superb, soaking up bumps like a like a Sham-Wow on spilt milk.

The RZR XP 4 900 also boasts amazing agility that inspires rider confidence and allows the pilot focus without fear of tipping or losing balance.

The 88 HP ProStar 900 EFI twin with DOC 4 valves per cylinder forces your body into the seat with impressive G-Force that instantly curls the corners of your lips upwards.

This kind of power is addictive and you really need to experience it for yourself to know just what we’re talking about.

Needless to say, this is one serious mill… lightweight, compact and durable, not to mention class-leading power to weight.

Walking up to this machine you can’t help but notice the beefy A-Arms and wide stance but looks can be deceiving, right? Let us assure you the 3-link trailing arm IRS, independent front A-arms, extended wheelbase and 2.5-inch body Walker Evans rear shocks are a marriage of parts made in heaven because the suspension on this machine is nearly flawless.

Let’s be clear here, we weren’t tiptoeing it over small rocks and washboard bumps either. Nope, we had the pedal to the floor and were hitting serious trail junk that had the potential to eject non-harnessed riders from their seats had they been riding a SxS without such an excellent suspension set-up. To say the RZR XP 4 900’s suspension gets a passing grade is a serious understatement.

As an experience test rider I’ve become confident in my abilities to pilot ATVs and Side x Sides in virtually any terrain thrown in front of my wheels.

As a passenger though, I would say I’m an absolute mess. Perhaps it’s a fear of the unknown or maybe I’m just a control freak (probably a combination of both) however as a passenger, in the RZR XP 4, I must admit I was unusually calm and confident.

Passengers have a lot to feel safe about too. First, the buckle-up side door and extended side roll bar make you feel like theres no chance of losing a limb. Fasten your seatbelt and you’re in there, secure as a bug in a rug. Of course, the “oh crap” bar right in front of you sure does help, and trust me when I say youll get good use of it!

Most importantly though, passenger and driver-wise, is the way you feel seated in this SxS. The low center of gravity and the wide 64-inch stance gives you a sense of stability and when it’s combined with Polaris’ optimized mass placement and positive tire camber, you just feel right.

We’ll have a full report for you in an upcoming issue of Dirt Trax Magazine. Look for the first issue of the season to drop late April!