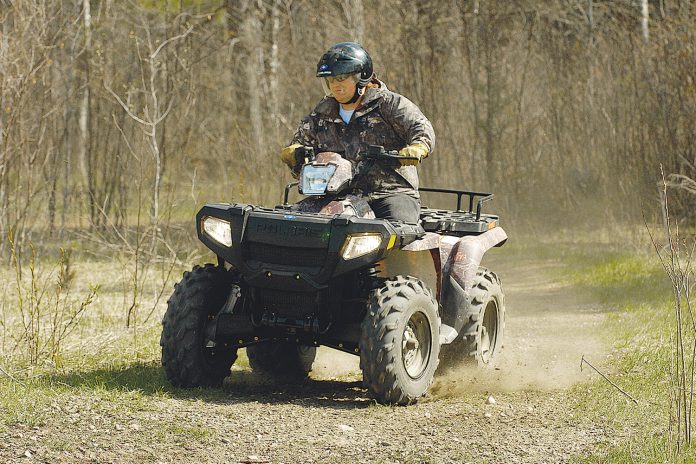 This Polaris has been around since the mid 1990s and in terms of sales, may be one of the two most prolific ATVs ever built (the other would be the Honda Rancher).

There were literally hundreds of thousands built and so many are still in use it must be frustrating to Polaris that many owners see no need to upgrade.

Our team became sold on the 500 primarily because of the way it rode. The smoothness and predictability of the McPherson strut front suspension and rear A-arms of this Sportsman were so good it actually continued to dominate in smoothness and rider comfort beyond the front A-arm technology that eventually replaced it.

The engine? Nothing special, just an overhead cam 4-valve single with few tricks and no real mind-bending power output.

It was however, married to ideal CVT clutching and Polaris excellent true 4WD that could be alternated between 2×4, 4×4 locked and AWD. The combo was dreamy in the way it could telepathically sense the riders demands – still is, but that system cut its teeth on the thousands of 500s consumers ate up.

This chassis was extremely comfortable with great rider placement whether you were sitting or standing.

The plastic racks were revolutionary for their time but provided good storage and fastening and gave the Sportsman a distinctive look.

Over the years our crew rode the 500 hundreds of times over some of the gnarliest, wettest, slipperiest ground we could find.

If we had one in our press fleet, it was always along for the ride, no matter where we were headed or whatever other types of ATVs we were taking.

Sometimes, if the trip was particularly long or rough, you literally had to fistfight someone to get some relief from other lesser models by pirating the keys to the Sportsman 500.

Did Polaris hit a sweet spot by building its best-ever ATV years ago? Sometimes we think so.