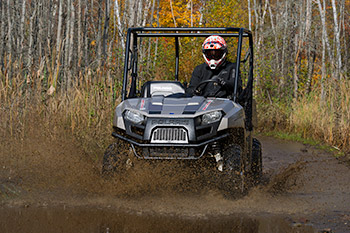 The appeal of pure sport side-x-sides is evident in just about every post we make on our Facebook page. Doesn’t matter anymore what vehicle we’re talking about, whatever the horsepower or engine configuration, you’ve made it clear you want more.

We’ve also noticed that in the eyes of many commenters every side-x-side absolutely MUST be a dune thrashing speed demon or we shouldn’t be talking about it.

Lots of guys dream of having sports cars, but a pickup truck might be the more practical choice. It’s probably why we don’t see a lot of pure sport side-x-sides out mending fences or in the bush hauling out big game.

Here’s the deal, not every SxS is a pure sport and although this segment gets a lot of the spotlight, the reality is, it isn’t the meat of the market.

Truthfully, as appealing as the pure sport market is, the utility segment seems the more practical choice for the average dude. Before the RZR was introduced, guys bought Rangers, Rhinos and Prowlers and rode ‘em on the trails while also using them to haul firewood or camping gear.

We were kind of surprised by the comments about the Viking recently. Seems the point of this vehicle went right over the heads of many readers who think Yamaha should’ve gone 100-percent pure sport instead of appealing to hunters, farmers and a huge portion of the off-road community. We don’t fully disagree and would like to see a pure sport SxS from the big Y, but the Viking is a smart addition to its lineup… and it has mass consumer appeal.

Get up close to utility SxSs like the Kawasaki Mule Pro FXT or Polaris Ranger 900 XP and see the engineering and thought that’s put into them and it’s clear this segment deserves attention. John Deere’s Gator 825i landed on our doorstep earlier this season and we’re reluctant to ever give it back. It’s Chery-built DOHC triple chugs along like a tugboat and it has the right comfort amenities to satisfy many consumers in a variety of applications from farming to hitting the trails for a whole day of fun.

The pure sport market sure is appealing and we hope it continues to grow and become even more competitive as more manufacturers jump into the arena. However, let’s not forget to show the workhorses the respect they’re due.