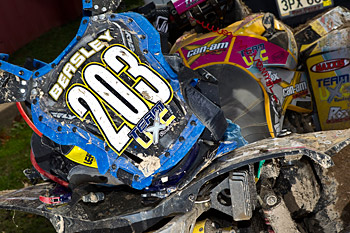 There comes a time in everyone’s life when maybe you have worked for a company or yourself many years and getting back to living has become a priority.

The many years of making a career have come to the pinnacle of what most determine to be success and its time to hang it up.

In the racing world this is only partly true. The racers get in on the ground floor and work their tails off to get recognized as stiff competition and champions in their perspective classes.

You fight for the number one plate and fight off others who try hard to steal your thunder. The mere fact that you could accumulate more than one championship is a feat in itself and bridging the divide to championship one, two, three or even four means your dedicated. Not to mention you will probably have a lot invested in the journey.

For Cliff Beasley of Team UXC in the GNCC racing series recently had his weekend. Cliff is a savvy businessman and has many irons in the fire. The fact that he runs multiple businesses as well as preps and races a national series makes the many championships he has won even that much sweeter.

When I asked Cliff what he intends to do with his now extra time he explained that maybe spending time with his wife and kids or a little fishing and hunting would be some of the first things on his mind.

I have personally witnessed Cliff Beasley come up through the ranks as a Utility ATV racer and champion with a humble determined spirit that speaks volumes of his genuine personality.

Cliff laid it all down at the final round of the GNCC series in Hurricane Mills Tennessee with no regrets and with a big smile he left all he had to give on the track.

Thanks for the ride my friend.