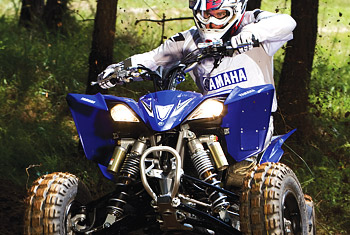 A YFZ Variation That Works way Better Than We Anticipated!

At first glance you may be squinting hard to see whats different about the YFZ-450X and, while aesthetically the X and R packages are nearly identical, there are a few major changes differentiating these two very different Sport rockets.

While there’s no doubt the R is designed for the track, the X is a purpose-built cross country or enduro racer giving Yamaha riders the ultimate platform to base their choice on.

The most noticeably different parts on the YFZ-450X are up front. While it looks similar to the R, in reality, its stance is 2.7 inches narrower.

In the grand scheme of things this doesn’t seem like a lot, however, firsthand ride experience will leave you with a different opinion.

On tight woods courses the narrower stance allows carving tight twisties with increased confidence at higher speeds. While the reduced width was intended to allow racers more freedom when riding narrower trails, one of the side effects is a reduction in bump steer.

Because the wheels are closer to the chassis and the tie rods are shorter, the overall leverage that a rock or log would have over the tire to rip the bars out of your hands is greatly reduced.

When woods riding, this means you feel less abuse and are able to ride at your highest potential. In simpler terms, it means you can win more races.

Yamaha wisely chose to reduce the caster angle from 5-degrees to 4. On paper it sounds minimal but on the trail this subtle tweak allows the X to turn in a more linear arc while decreasing the overall turning radius. The result is tight left-to-right directional inputs with reduced steering effort and less motion of the handlebars.

It’s interesting to note in comparison to the original YFZ450 the new X has a 23.4mm longer A-arm (tie-rods are shorter) with similar wheel travel but still manages a width of 46.1 inches. Huh? This is all thanks to the A-arm mounts being located closer together at the center of the ATVs frame.

Due to the width change, suspension travel did get a minor reduction from 9.8 inches on the R to 9.4 on the X. While less travel is never thought to be a benefit, the X package suspension calibration seems to offer a more usable spectrum of travel than even the R does.

This, coupled with reduced bump steer, makes for an incredibly precise handling ATV. The X’s engine is the same as the 2009 YFZ 450R but does feature newer EFI calibration and therefore responds better throughout the power band. This calibration was so well received that it found it’s way onto the 2010 450R, too.

Now that there’s both a track and trail version of the YFZ450, it does seem odd Yamaha didn’t opt to factory equip the R with race rubber and the X with a trail pleasing tread.

Yamaha believes consumers can trick out their rides after the fact and not everyone wants the track or trail rubber found on other Pure Sport ATVs. While we think a better tire would bode well for Yamaha, we really don’t think it’s a big enough problem to turn buyers off.

While differences between an “X” and an “R” appear minimal, almost indiscernible to the human eye, riding characteristics of the two YFZs are polar opposites.

At All-Terrain Vehicle Magazine we’ve been telling Pure Sport riders to buy what they need and not what looks the coolest. Fact is, Yamaha just made this critical decision easier.

The X is fully capable of track riding but its heart is in the back forty, right where the majority of 450 riders find themselves most of the time. AJ Lester
AJ is Co-Host of DIRT TRAX Television which can be seen on OLN and Sportsman Channel in Canada, Outdoor Channel across America and globally on our YouTube channel.
Previous articleGODSPEED ROCKY!
Next articleYamaha GRANTs $80,000+ In First Quarter of 2010