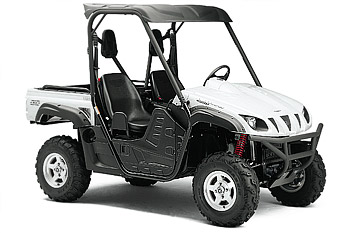 Licking their wounds following an intense round of legal battles aimed at the safety of Rhinos, Yamaha engineers have amended the original version of the industrys most popular side-x-side with some additional safety features that, when coupled with a bit of common sense, make this the safest and most stable Rhino ever.

Wheel spacers at all four corners widen the Rhinos stance to 3.2 inches wider than the similarly sized mid-size Polaris Ranger 400. Under sensible driving conditions, this Rhino is as stable as any other side-x-side in the twisties and across uneven surfaces.

Beefy front and rear reservoir shocks add considerably to ride quality and comfort, too. Through some of the rockiest and roughest trails Northern Ontario has to offer, our spines were left comfortably intact.

Side protection is something we’ve always been a strong advocate of on side-x-sides. Yamaha went all the way, providing molded, hinged doors that snap shut to keep the driver’s and passenger’s legs inside the vehicle during operation. This is a well-thought-out and practical feature that can prevent serious leg injuries caused from rubbing too close to a tree or other intrusion.

With the comfort of dual bucket seats and the Rhino’s center mounted shifter and parking brake, plus a roof protecting you from the elements, you feel like youre sitting in a pick-up truck every time you slam the door shut and fire up the Rhino.

Two areas where we think Yamaha may find some resistance are as follows: Power. Lets make this clear: There’s no lack of low-end grunt with the Rhino’s torquey 700 single. This legendary 686cc mill churns out impressive power at low speeds, however, keep your foot on the throttle and you’ll immediately feel a governor cap your fun at a too slow speed for a SxS in this category. This is likely a direct result of legal proceedings, however, we know this engine can churn out more power and sadly; top end experiments result in disappointment rather than giggles.

Our second frustration is the price point of this particular model. We’re not revealing anything you can’t find on the internet anyway, but this Rhino is priced at almost $2000 more than a similarly equipped 800 Ranger XP and over $4000 more than the new mid-sized Ranger 500 EFI.

We do feel, however, that the level of quality delivered by Yamaha engineers will adequately satisfy die-hard Yamaha fans. The Rhino lives up to the Big Y’s reputation for superiority we’ve become accustomed to.

The 2011 Yamaha Rhino 700 FI Sport Edition delivers on both quality and suspension performance and enhances Yamaha’s bulletproof reputation for long lasting, smooth running engines. We’re confident that Rhino buyers will remain satisfied for as long as they own it.