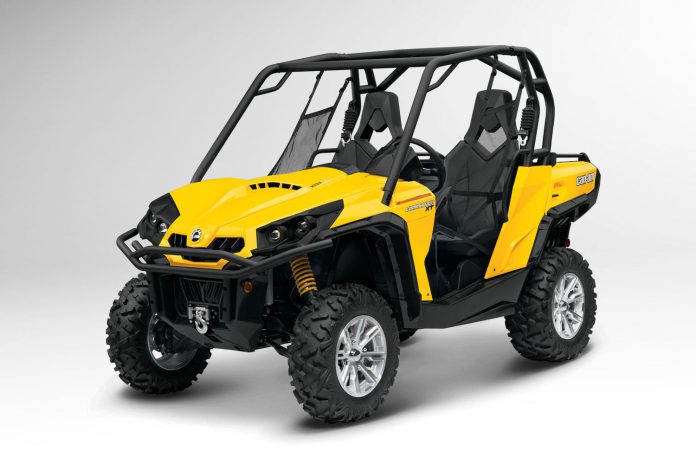 In anticipation of Can-Am’s much-awaited new SxS, we were prepared for a twist in the road. We knew Can-Am would not “me-too” its first entry into the UTV biz.

BRP is innovative in a way few manufacturers anywhere in the world are. There are fertile and talented minds deep within the bowels of BRP’s Valcourt, Quebec Design and Innovation Center. When the sheets came off the Commander in early June we were affirmed in our assumptions. To say the very least, the Commander is pretty much what you’d expect from BRP.

The Commander 800 is ridiculously powerful. It’s capable of running with anything in the side by side biz right now, including the mighty Polaris RZR S 800 HO. The 800 Commander’s low, center mounted 80-degree Rotax EFI V-twin dispenses thrust in heroic proportions, slamming the driver deep into the Commander’s sumptuous ergo-correct seats.

The 1000cc Commander, powered by an 80-hp Rotax EFI V-twin, is unspeakably fast. Speaking with some desert-savvy aftermarket types at the Commander intro produced interesting comments. One racer claimed the only SxS capable of staying with a stock 1000 Commander was a full-on Baja modified RZR S.

With all this talk of outrageous power you might think the Commander’s 800 and 1000 mills would be unruly at trail speed on tricky terrain. Wrong. Its power is dispensed by an industry-first “drive by wire” throttle pedal with a dash mounted dual mode switch. When it’s time to shred all four meats and do some WRX powerslides, just select “sport mode” and get it all, right now. When plying trails and tricky sections, switch to standard mode and your grandmother could drive the 1000.

The Commander is a big SxS. It’s wide and stable and offers a low, sporty seating position. Can-Am claims a lower, center mounted engine location than any other center mount UTV in the marketplace.

The Commander’s twin trailing arm rear suspension is a perfect fit for a SxS and has allowed Can-Am to include an innovative and incomparable dual tailgate, “double decker” tilting dump box. We thought Can-Am’s new UTV would be a no-compromise Pure Sport, high performance entry using an engine placement similar to the RZR.

As it sits, the Commander is clearly the highest performance, center engine SxS as a result of both its imposing power and ultra-low center engine placement. However, it is not a RZR S. So that leaves us thinking this way: You can easily rationalize the Commander against a RZR S with its big gulp dump box and crazy, incomparable power. Still, when it comes to all-4-wheels-loose handling and stability in the air, the RZR’s patented, behind-the-seat engine location makes for a better 10/10ths handler.

The Commander impresses at every turn with innovations that’ll push the industry to respond. The seats are clearly the best we’ve ever experienced in any side by side and they can be removed in one piece and used around the campfire for seating.

The dual tailgate dump box has a removable false floor allowing owners to carry ji-bungous loads or, particularly if you’re running wide open, carry heavy stuff way lower than possible in any other similar vehicle. The instrument cluster is mounted directly on the tilting steering column allowing the gauges to be viewed more comfortably.

The Commander comes standard with Can-Am’s patented Visco-Lok true 4×4 system. This makes it and all Polaris Rangers the only SxS vehicles with true 4WD. In other words, you do not need a manually locking differential as the Visco-Lok system does it automatically only when needed. Both Commanders use a huge 10-gallon (38 liter) fuel tank and Can-Am claims both the 800 and 1000 deliver substantially better fuel mileage than their closest competitors.

Can-Am wasted no time going upscale with the Commander offering both 800 and 1000 models in base, XT and X Package trim. There are also camo-versions available for the hunting crowd. We really like the look of the XT models with tasteful, aggressive aluminum wheels and bush bars. The X package is a bad looker and in our opinion, uses a little too much black. Trick tires, wheels and high performance shocks complete the X designation.

Ultimately, everyone who knows SxS vehicles asks us the same question about the new Commander: “Is it better than a RZR S?”. Clearly, Can-Am wins the power equation hands down. Nothing, absolutely nothing, pulls as hard as the 1000 Commander. From purely a power perspective, this thing is in a league of it own – and not by a small margin, either.

From a handling standpoint the Commander, in our opinion, out-handles and out-rides every other center engine side by side. However, it does not out handle or outride the RZR S in stock trim.

On the other side of the equation the inherent versatility of the Commander compared to the RZR S makes a strong argument for Can-Am. The RZR is a very single-minded vehicle; a high performance, no compromise SxS in every way.

The RZR has a very small cargo “deck” which does not dump. Conversely, we’re not hearing any groans from the people who own them. They knew what they were getting – a Pure Sport SxS.

Jose Boisjoli, CEO of BRP, has his hand on everything the company does. His mantra has been that BRP will not produce anything that’s not “fun”. I had the opportunity to ask Jose about this edict when the Commander was introduced and we witnessed it was part Pure Sport and part utility UTV.

As always, his answer was both intriguing and thought provoking: “Who said carrying stuff in a SxS couldn’t be fun?”

If we’re going to enter a segment that’s selling strong and the dominant players have multiple platforms to cover multiple segments, we would do exactly what Boisjoli and the Can-Am braintrust did with the Commander. They delivered a better utility side by side and a more versatile Pure Sport SxS with power that’ll immediately define Can-Am’s identity in the UTV business.

By the way, we do think hauling stuff is fun.

Mark Lester
Mark Lester is Co-Publisher of SUPERTRAX Magazine and a regular Host on Dirt Trax TV.
Previous articleDirt Trax Challenges You To Get Out and Race
Next articleAmazing New Technology On ATVs and Side-x-Sides