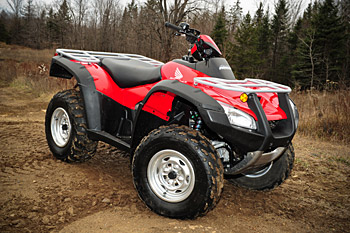 A frigid fall day marked my first ride aboard a 680 Honda Rincon in years. After being literally spoiled by larger displacement ATVs offering significantly more features, I came away with a few of my own impressions.

Initial tip in of the throttle delivers less-than-impressive torque. In fact, if you’re all about having your mind blown at every blip of the throttle, let’s be clear up front that your brow may furrow at the first squeeze of the trigger.

All said though, It is impressive how this ATV manages at increased speeds down smooth sections of trail. As the gearbox-style tranny shifts to cruising speeds, the 675cc single comes to life and you quickly become aware that you’re moving along at an impressive clip.

As you transition from smooth and even fire roads onto rock-strewn technical trails though, you’ll become aware of the steering effort required to successfully maneuver the Rincon.

Every rock in the trail will seem to line itself up right in your path patiently waiting for your tires’ impact. Try to tackle a trail at any speed higher than a steady crawl and you’ll fall victim to ridiculous bar whip.

The solution to this of course is EPS, which has us baffled because Honda claims to be the originator of power steering on ATVs, so why wouldn’t its engineers include such a useful piece of technology on their flagship offering?

Furthermore, the stock suspension seems to be set way too stiff, which causes the back end to bounce around on the trail at medium to higher speeds. Again, slow your roll to a steady crawl and the independent rear suspension easily handles trail interference and smoothes your ride out like Skippy over warm toast.

The Rincon comes equipped with a few notable features including shift-on-the-fly 2 to 4 wheel-drive (TraxLok), a beautiful digital gauge cluster, plus Electric Shift Program (ESP), which at the flick of the switch on your right handlebar allows the rider to switch from automatic transmission to semi-auto and shift gears via the buttons at your left thumb.

Furthermore, there is considerable space in the footwells for maneuverability and comfortable positioning in the narrower saddle thanks to the longitudinally mounted engine and braking power from the dual lever hand brakes is stop-on-a-dime exceptional.

Our test riders (myself included) would unanimously like to see the addition of EPS on future Rincons and would love to see Honda follow Kawsaki’s lead and be the second Japanese OEM to offer sweet aluminum wheels on a flagship unit. This just makes sense considering every American manufacturer makes bling a stock offering.

Honda’s 680 Rincon is not intended to be a big bore trail shredder jammed with arm stretching power. It is capable of navigating the rough stuff and purpose-built for trail cruising and work around the farm or hunt camp.

Let’s sum it up like this: This writer is incredibly familiar with Microsoft computers and is in fact trained and certified. However, I exclusively use a Mac desktop, a Mac laptop and an iPhone because I know these devices to be dead-reliable and know they will hold up to whatever abuse I put them through. Honda owns this mind space in the ATV industry and in my opinion, this is one of the top reasons a Honda owner will always buy Red.

Mike Lester
Mike Lester is Staff Photographer and Digital Content Manager for Dirt Trax TV. He is also a Contributing Editor and Guest Correspondent on the show.
Previous articleBRP Announces Can-AM ATV Sweepstakes
Next articleWHY DO YOU YAMAHA?