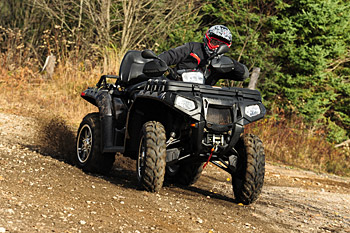 Without question, the 2-up ATV industry has crept its way into the hearts and minds of ATV enthusiasts everywhere.

Who would have thought that a “Tourer” could actually have the showroom appeal of a 1-up ATV?! Sounds insane, but Polaris has embodied this unique balance in its Sportsman 850 Touring.

The XP chassis features a longitudinally mounted engine, which provides considerably more room in the footwells delivering a more natural feeling when in the saddle and especially when transitioning from a seated to a standing position. Furthermore, this additional space goes a long way when you have a passenger at your back.

Polaris’ unique Comfort Ride system is essentially a spring shock mounted just under the rear seat and provides additional support for your passenger when the ATV’s suspension is pushed to its limits. Though not ones to usually take the back seat, we found this spot so comfortable we might not complain nearly as much if we had to relinquish the controls again in the future.

We hear a common complaint about Touring ATVs from guys that see the benefits, but have a tough time giving up the performance and handling a 1-up ATV delivers. We think Polaris has been listening because the 850 Sportsman Touring has this riddle solved.

Our favorite feature has to be how quickly and conveniently you can turn this 2-upper into a 1-up ride. Literally within minutes, you can remove the rear seat and hand grips and you’d swear you were riding a 1-up Sportsman XP. In 1-up trim, you have full use of your front and rear racks so you can load up fire wood, hunting or camping gear, or just unleash the 70 horsepower monster under your seat for a full day of solo riding.

Proportional EPS works exceptionally well to provide smooth handling through tight twisty trails, especially with a passenger in tow and little features like heated hand grips and a thumb warmer kept are digits toasty on even the chilliest fall days. Snow? Crank up the hot grips, hook on your Glacier Plow and clear your driveway comfortably all winter long!

At Dirt Trax, we’re huge proponents using an ATV designed for 2-up riding instead of adding a king/queen seat to a 1-up ATV. Single passenger ATVs were not designed to accommodate the additional weight placed over or slightly behind the rear axle, which can result in instability when climbing hills putting you and your passenger at risk of flipping over backwards.

The 850 Sportsman Touring sacrifices nothing in performance to provide you with the safest most comfortable ride you could ask for and in our opinion, that’s a deal maker right there.