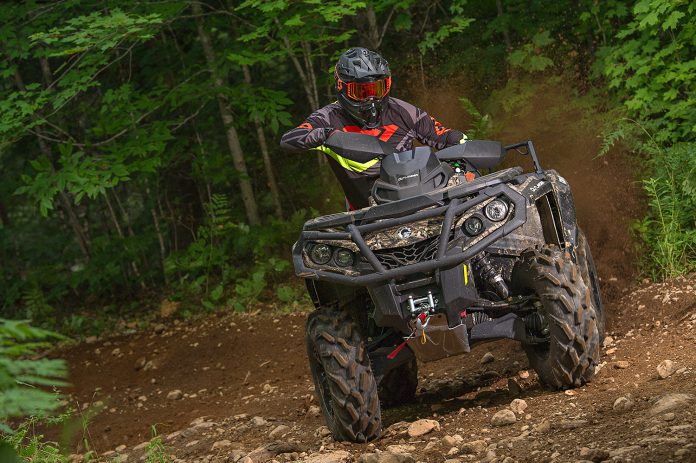 I got out on such a good rip on Can-Am’s Outlander 650 Mossy Oak Edition this past week! I was gone for a couple hours by myself, just focusing on its details and enjoying some solitude as I cleared my head.

I feel like I got a solid impression of this vehicle after experiencing a wide range of terrain including gnarly, rocky hillclimbs, big soupy mud holes after a good storm and some higher speed straightaways. I’ll break out my summary in three sections here but first, let’s just take a look at the details.

First off, what sets this model apart from an XT and XT-P is a bit more than the camo makeup. Yup, it’s the Mossy Oak Edition complete with a licensed pattern that looks really nice. I personally don’t think you need to be a hunter to appreciate this look on your ride.

It also features nice wheels, heavy duty front and rear bumpers, an aluminum skid plate, a 3,500 pound winch, DESS and the biggie: heated grips and thumb warmers whose controls look curiously similar to those found on a Ski-Doo snowmobile. All of this powered by a Rotax 649.6cc EFI V-Twin. It’s pretty loaded up.

Mike Lester
Mike Lester is Staff Photographer and Digital Content Manager for Dirt Trax TV. He is also a Contributing Editor and Guest Correspondent on the show.
Previous articleBEST ATV at EVERY BUDGET
Next articleALL-NEW SPORTSMAN 450 HO AND SPORTSMAN 570