Saddling Up With The Lone Ranger and Kawasaki 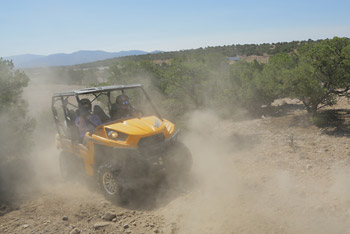 Santa Fe, New Mexico – Recently, Dirt Trax was chosen to be an honored guest of Kawasaki and amongst the very first media to view the premiere for the much-hyped Disney film, The Lone Ranger, starring Johnny Depp.

The movie was superb (even though Johnny was a no-show) – we highly recommend it – but that’s not the only reason we were there. The day of the movie premiere, the powersports media had the opportunity to take the Teryx4 out to Caja Del Rio Canyon, near Santa Fe, for an exciting off-road adventure for a few hours. Conditions were dusty but the scenery and ride was magnificent.

Kawasaki’s partnership with Disney for the “Live the Legend” media event, featuring the modern-day “Silver” by means of the Teryx4, is a highly unusual marketing strategy, aimed at reaching the masses while attempting to bolster Kawasaki’s image as a “cool and rebellious” company but nonetheless a plan Kawi is committed to.

Check out the action-oriented “Live the Legend” video on Kawasaki’s YouTube channel. Kawasaki was not gun-shy about boldly stating they have little interest in being like the other OEMs either. Kawasaki is doing its own thing and that’s that. Okey-dokey.

Dirt Trax has always had good things to say about the Teryx4 as a fun to ride, capable Side x Side and that’s the honest truth. We can’t say we’re completely on board with its philosophy to market to the masses as the industry bad-boy, but they have partnered with some pretty top-notch companies to gain a broader recognition.

Obviously we would like to see Kawasaki stay true to the core enthusiast market and it’s our opinion Kawi should maintain its focus on improving and engineering better and better vehicles to stay competitive, but that’s just us.

To Kawasaki’s credit it is generating a great deal of excitement and it has done a good job of interconnecting the similarities between its desired rebellious image and the defiant individuals depicted in the Lone Ranger movie for this promotion.

Dont get us wrong, we’re not saying Kawasaki isn’t going to build new and improved products either. The Big K is just mainly focussing on the proven products they have right now and building its “Let the good times roll” image.

Even though Kawasaki announced it would be marketing to the broad spectrum, Kawi did clearly say the vertical powersports media was its bread and butter and it understands the enthusiast media is where the focus of its promoting and ultimately the bulk of its sales will stem from.

Dirt Trax Gets a Taste of Hollywood

On the last day of our New Mexico adventure, the powersports media were “deputized” and given the unique opportunity to mingle with the Hollywood media and then perform as expert guides, giving them a ride they’d never forget on the Teryx4.

My side-kick/Tonto was a fine young chap from London, England who worked for Empire Magazine and came to the ride totally unprepared but nonetheless ready for anything.

It was obvious I was dealing with a newbie here and I warned him that penny loafers, Capri pants and Ralph Lauren collared shirts were not the recommended riding gear for this event. However, he did have a helmet and a willingness to get dirty, so off we went.

We were privately instructed to give this designer-hand-bag crew a thrill they wouldn’t forget, so I was bent on making sure I followed orders.

By the end of the ride, young James-from-London was exhausted from holding on with white-knuckles and screaming like a little girl.

I thought it was funny that a guy who writes about movies for a living closely resembled Jim Carrey from Mask by the end of the 15 minute ride. Smmmmmokin! It was a great way to end this truly unique Live the Legend Adventure of the Teryx4.

Visit www.kawasaki.com for more info on the Teryx4 and other products, including more about this unique partnership with Disney films.

Matt Lester
Matt Lester is an Account Manager for Dirt Trax TV. He is also a Contributing Editor and Guest Correspondent on the show focusing on tourism & adventure segments.
Previous articleCAN-AM TAKES FOUR CLASSES AT MUD NATIONALS
Next articleWHINING COMMANDER