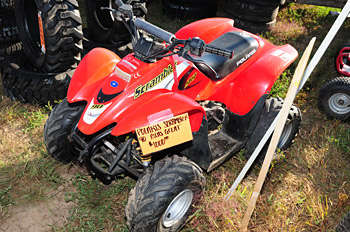 The first thing I do when trying to sell anything is to make sure it is priced to actually sell.

I recently cleaned out my garage and tried to sell a couple of small dirt bikes as well as some parts. I listed the bikes on several forums as well as on Craigslist.

I had two entire bikes in parts that if assembled, the used retail would be around a grand. I had them priced at $650 to get things going, but was willing to take as low as five hundred for everything. In my opinion, this is a pretty fair price.

Now, I have never tried to beat anyone out of their hard-earned money, but it seems I get the reverse when I try to resell an item.

It was evident from the first few interested callers that I could possibly sell this truckload of gems in one big drop, but as the callers began to talk they just wanted more and more discounts.

I heard stories of how they could buy a running bike for this much and that much and I finally told one guy to buy the running bike instead of giving me so much grief for my stuff.

I totally understand someone wanting a great deal, but there’s a limit. When unloading your used stuff or shopping for your pre-owned ride, seems like the seller needs to be just as careful as the buyer nowadays.