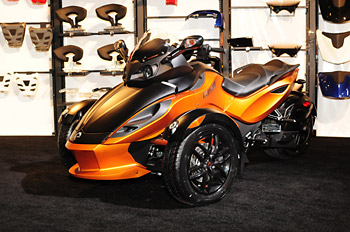 Seems the Can-Am team has been making significant progress in the ATV and SxS biz while literally knocking the socks off the motorcycle world with the innovative Spyder 3-wheeled ‘Roadster’.

In the ATV biz, any movement among the OEMs in market share percentages is big news. According to all our sources, Can-Am has now moved into the number four market share position.

On the Spyder news front there are a number of luminaries claiming the Roadster is now the number five selling “motorcycle” in the North American marketplace behind Harley and the four Japanese motorcycle manufacturers.

This means Spyder is outselling all the euro and Harley-look-a-like brands after only three model years in production, offering just two basic models. Yikes.