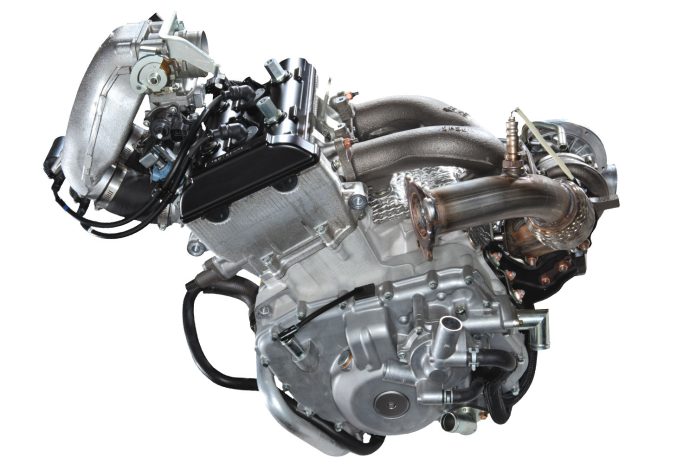 One of the biggest questions we get asked is: “Wheres Suzuki lately?”

The fact is, the company hasnt introduced any new off-road product for a while and unless you live right next to a Suzuki dealership, has pretty much dropped off the cliff in terms of top-of-mind awareness.

We think things may be changing with Suzuki and the company will soon be making a drive to increase its off-road market share.

How? One of the areas Suzuki never got involved in was building performance SxSs.

Certainly, if the company wanted to make a big splash and get the attention of thousands of fans, it could do so by taking its expertise in building incredible off-road motorcycles and applying it to the debut of an arresting SxS.

Too much of a long shot? Think about this: Until this year, Arctic Cat has used a 1056cc 4-stroke twin produced by Suzuki, in its snowmobiles. In its naturally aspirated form this engine produces about 120-hp and when turbocharged puts out a staggering 175-plus ponies.

Former NASCAR driver, Greg Biffle and his company, Pace Off-Road, used the same engine in versions of the Wildcat and RZR and then boosted it to put out over 270-hp!

We tested and actually owned one of these and that engine is as reliable as granite and ridiculously fast. Most certainly it would make a tremendous foundation for a world-shaking SxS from Suzuki.

All the elements are there for this proud company to build something exciting. Is the will to do it there?