TACTICAL TO THE MAX 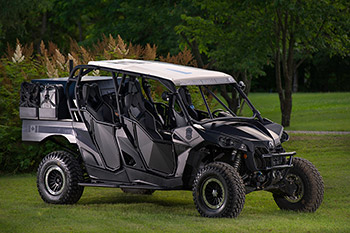 You may not have known it but there’s a very healthy market for military, police and border patrol vehicles that can go places and do things some very exclusive and super-expensive armored vehicles can’t.

Mike noted there were shortcomings with many commercially available tactical vehicles. These very costly truck-based armored units can run upwards of a hundred thousand dollars and although effective, had limitations in both inner city emergency situations as well as in rural applications. Much of the problem lies in the vehicle’s width and overall weight.

Yes, if you start with a production SxS and modify it you can build something for way less bucks and end up doing a better job!

The TerraTech built Maverick shown here is a 4-seater, dubbed Max Scorpion, equipped with a 101-hp V-twin and EPS. After that, TerraTech pretty much changed everything.

This flat-black Mav prototype is labeled “Tactical Patrol” and is designed to go places the bigger stuff can’t get into carrying four fully outfitted crew and a ton of gear.

There’s at least one other TerraTech prototype in the works painted either Desert Tan or Army green with custom add-ons and different tires. It is labeled for concealment.

Why choose a Maverick Max instead of a Commander? Mike says it has to do with power-to-weight, the high level of available technology in both the suspension and electronics and, oh yes, horsepower.

Seating space is also a huge consideration considering the crew will be decked out in full combat gear, carrying weapons and climbing in and out of the vehicle, likely while it’s moving.

Serious enough for you?