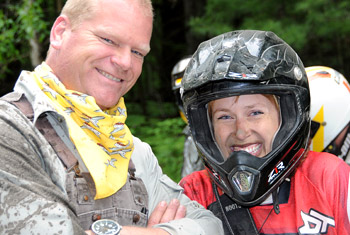 Last weekend, June 13, marked All-Terrain Vehicle Magazine’s second visit to the Canadian Forces Base in Borden, Ontario for the ATV Ride in Support of The Holmes Foundation presented by the OFATV and sponsored by Can-Am. Along with us for the first year was Dirt Trax Television.

Driving off Highway 400 towards the base, I began to realize how isolated it is. Barbed wire fences lined either side of the road securing the endless expanse of wilderness I’d soon be riding through. Just as I began to feel like I’d gone in the wrong direction, the forest opened up to reveal the base stretching endlessly like a university campus.

A few really cool things make this ATV event stand out. For one, attendees get to ride their ATVs in an area normally closed to civilians. There are countless miles of trail winding throughout the base.

In fact, during our five hours of riding, we never went outside Canadian Forces land! There was amazing diversity in the riding terrain, too. Sand, rock, mud – in fact, a lot of this trail is used for testing tanks! Some of the bogs we rode through brought mud up over the fenders!

Another highlight is that you get to meet international TV personality, Mike Holmes, in person. You can share your ride experiences with him and get a photo. He’s very personable and loves ATVing. We rode with Mike all day as he led the pack on his 2009 Can-Am Renegade. There wasn’t a mud pit that could stop him.

“Who Knew Mike Holmes liked mud so much!” commented Taera McLean, Co-Host of Dirt Trax Television. “It was a wonderful day complete with endless trails and lots of riders. Plus, it was for a great cause – The Holmes Foundation!”

Following the ride, the OFATV volunteers put on a fabulous BBQ. Burgers, dogs, fresh-cut fries and butter tarts to top it off. After our ride, we were starving and it was the perfect ending to a great day.

Mark your calendars for next season and sign up early to ensure a spot at this event in 2010. You’ll have a great time with great people, riding some of the nicest trails you’ll never get a chance to ride otherwise.