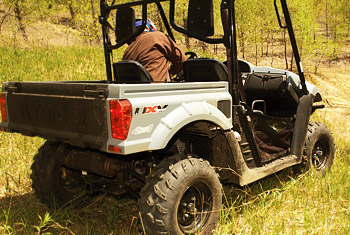 Firing up the KYMCO was simple on our warm test day, but could be more challenging in extreme environments since it lacks electronic fuel injection like some of its competitors. We understand the cost-savings, however, and think buyers will, too.

We took the KYMCO 500 on all the trails, which included both narrow and wide forest trails, an old gravel pit, up the ski hills and through a muddy bog and it did fairly well.

Acceleration is average on this heavy unit and climbing up the riding area’s longest, steepest hill, the UXV slowly and steadily scaled the slope. However, even in low, we were forced to turn off before the peak as the machine slowed to a near stop.

After climbing the hill, we tested the UXV’s engine braking by freewheeling down the steep grade. To our surprise, the 500 built speed fairly quickly (even in low range) and required us to control the descent with the brakes more than we expected. Thankfully, KYMCO engineers added hydraulic disc brakes and steel braided brake lines for improved response and performance.

The KYMCO was much more impressive on the forest floor. The 59-inch width, which is wider than the Rhino and one-inch narrower than the Ranger 500, makes for a very stable platform.

We were pleased with its aggressive cornering ability and superb stability while at play in the facility’s gravel pit. Even in a tire-deep mucky bog, the KYMCO easily pulled us through to the other side. Its steady throttle (foot pedal) control was also inspiring.

Like many buyers, little things matter to us and the UXV 500 certainly has some good features, such as its almost-hidden parking brake lever. We also like the center digital dash display (though the design seems dated), automotive-type shift lever and cargo bed liner.

Storage space is also important for the end user. From farmers to handymen, buyers stuff everything in their rig so they have to make fewer trips back and forth from their truck to the job site.

The UXV has a small spot beneath the dashboard, a glove box, and two other places for tools and supplies (under the seat and hood).

We think only an entry-level side-by-side comparison will reveal how well the KYMCO stacks up to its competition. However, on paper and during our limited seat time, we found it to be ready, willing and able for anything and a fair deal for buyers still looking to enter the side-by-side market.

This may just be KYMCO’s best vehicle to date.