THERE’S A PRICE TO PAY FOR PLAYING IN THE MUD 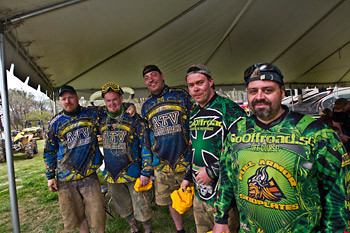 Playing in the mud with your ATV or SXS is a lot of fun, but it can be a very expensive hobby.

After attending a large annual event for mud riders everywhere I began to slow down and think of just how much cash was being thrown out to have a great time in the swampy mess.

During the event I noticed there were a lot of broken machines littering the property and some had simply been abandoned in the deep mud with the owners were nowhere to be found. Personally, I couldn’t leave a six or eight thousand dollar machine behind because it was stuck, but I’m not one for putting my personal machines in that kind of stuff anyways.

I also noticed a group of guys from Sweden at the event. After hearing them talk about how much they loved their Can-Am Renegades I was curious as to just how they were able to get their machines from their homeland over to Texas.

Turns out every year for the past few years a huge group of Swedish fellows have been packing a cargo container almost 8 weeks prior to the event at a cost of almost $4000 US.

Since they all flew over to the US and have no trailer, they also have to pay for landing fees to get the ATVs from the port to the event! This was probably the most expensive venture to ride that I’ve heard of and if that isn’t a true desire to ride then I don’t know what is.

I’m all for having fun, but for some it just costs a lot more than it does for me.