THOUGHTS ON THE 2015 HONDA RUBICON 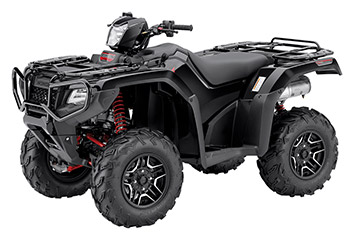 Honda just released word it has taken the venerable Rubicon 4×4 to a new level of competitiveness. From any angle this is good news!

Almost a decade ago the Rubicon was intended to be Honda’s flagship ATV model aimed at addressing the insane popularity of the Polaris Sportsman 500.

Some say the sizzle is off the 500-class and while Honda has pulled the sheets off a vastly improved Rubicon to compete there, 500-class sales are not setting records.

The goodness in the Rubicon intro is this: It looks like Honda got the memo – if you want to win in the 500 class you better meet Polaris head-on because it pretty much owns that real estate.

So what do we think about the new Rube? We haven’t swung a leg over it yet so we can only comment on what the spec sheet says. The move to independent rear suspension is monumental – particularly when you consider Honda is last-in with this class defining feature.

A locking differential has been showing up on other Honda models and it’s a must in this segment. However, the most important info in the spec charts is a new low range sub-tranny and a standard winch mount. At last Honda owners can plow snow without risk of overheating the transmission and clutches.

On top of this it’s okay if you install a winch on the Rubicon! Nice, but long overdue.

We like the new, much more aggressive looking bodywork and it sets the Rubicon apart from the same-as styling of nearly all past Honda models.

Honda’s persistence to deliver its ATVs with gear-on-gear trannies continues. Frankly, when Honda lands a cost effective CVT we’ll stand and applaud. For now, the Rubicon will get an auto-shifter transmission or a gear-on-gear semi-auto – your choice.

We’re anxious to wring this new Honda out for your benefit but are told we’ll have to wait until this fall to get our mitts on one.

For sure Honda needs this ATV, however it also needs more SxS product as the industry radically shifts to SxS vehicles.

It’s possible North American SxS sales will exceed ATV unit volume in the near future. Honda’s new 500 Pioneer is a credible stab into an as yet unexplored SxS segment.

We hope to bring you more hands-on impressions on this vehicle in the very near future.

In the meantime, we think the new Rubicon signals Honda is getting the message.