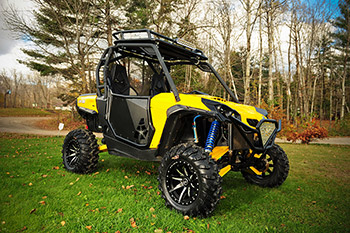 These heavily accessorized vehicles we’ve featured both on TV and in DirtTrax Magazine showed vast improvements in traction, engine-tranny performance and handling with the addition of key aftermarket kits and goodies.

There’s been one very interesting conclusion from some of these projects. In many of them the target was to get the same kinds of performance results from a semi-utility SxS like a Commander, Prowler or Ranger as you can now get from a Wildcat, Maverick or RZR.

Our conclusion is, although those sport-utes were hugely improved with various widening-kits, trick wheels and tires and sophisticated shocks, those aforementioned pure performance rides flat-out performed better out-of-the-box than the modified ones did.

This brings us to a very stunning conclusion: Before you spend big bucks amping up the performance of your trail utility SxS, you should seriously consider just upgrading to an all-out performance targeted one.

In fact, you’d be way ahead of the curve if you just took the dough you were going to spend on aftermarket stuff and add it to the new Wildcat, Ranger or Maverick you’ve purchased.

Don’t get us wrong; there are real benefits to upping the performance of a sport-ute. You can make the handling and ride way better with a switch-up to better tires and shocks.

What you should consider is what you want to end up with. If utility is still a big part of your enjoyment of a SxS, then the advantage of having load-carrying and towing capabilities combined with the above mods makes good sense. Just don’t expect high speed performance on the level of a pure-performance SxS – especially one you’ve spent some aftermarket money on.

It all come s down to how you define “performance”. If it’s all-out desert and dirt running, you need to think hard about what you’re buying before you press hard on a sales contract.

Kent Lester
Previous articleHOW GOOD IS YOUR SUSPENSION?
Next articleHOW MUCH SHOULD YOU MODIFY?